PC gaming is all about speed, and with the ViewSonic XG2402, you definitely get plenty of it. This 24-inch monitor boasts a screaming 1-millisecond pixel response rate, an impressive 144Hz refresh rate, and it utilizes AMD’s FreeSync anti-tearing technology to deliver fluid gaming action. It also offers plenty of gaming presets and a fully ergonomic stand, but it can’t match the design and overall performance that you get with our top pick for midsize gaming monitors, the 25-inch AOC G2590FX.

The XG2402 uses a 25-inch Twisted Nematic panel (specifically, AU Optronics M240HW01 panel) with a 1,920-by-1,080 resolution and a 350 cd/m2 brightness level. As part of the overall design, it gets a matte, anti-glare coating that is housed in a black cabinet with 0.9-inch bezels on the top and sides, but 0.91 inches on the bottom. The display is supported by a black stand with a red trim, and a cable management loop on the back. The base stand is not as deep as its predecessor, with a brushed top surface, but gets a shiny silver and red ‘XG’ logo on the far right.

This ViewSonic monitor gets the best ergonomic adjustment at this price point. You get up to 175 degrees swivel adjustment, and the mounting arm has a hinge that gives you 4.7 inches of height and another 27 degrees of tilt adjustability. Plus, it lets you pivot the panel up to 90 degree for Portrait-mode viewing.

Also, there are four VESA compliant holes, if you need to mount the cabinet to a wall using an optional VESA mounting kit. The XG2402 has two 2-watt speakers that are ideal for low-volume listening, but don’t expect any bass response or high volumes to put you in the game.

All ports are at the rear (down-facing) of the cabinet and include two HDMI 1.4 inputs, a DisplayPort 1.2a, two USB 3.0 ports (plus upstream) and a 3.5mm audio output. The full 1080p signal at 144Hz is supported by either DP or HDMI 1.4, available on both Nvidia and AMD GPUs. Bundled into the package are a DisplayPort cable, a USB cable and power cable as standard accessories.

The OSD (On Screen Display) controls are pushable down-facing buttons on the right side of the monitors. The button labels are lightly colored red, facing forwards. Picture settings on this monitor include Brightness, Contrast, Color Temperature (sRGB, Bluish, Cool, Native, Warm, and User), Sharpness, ECO mode, and Aspect Ratio.

The ViewSonic XG2402 delivers good gaming performance out-of-the box. The monitor’s input lag (the time it takes for the monitor to react to a controller command) of 9.8 milliseconds is great, coming slightly behind the BenQ SW2700PT and the BenQ PD2700Q, both of which score 9.5 milliseconds. The panel exhibits blur-free motion handling, with no visible ghosting on Crysis 3 (PC) and Grand Theft Auto V, and with AMD FreeSync-enabled, Crysis 3 look incredibly smooth and fluid.

Although the monitors colors appear rich and well defined, color accuracy is slightly skewed. Its red and blue colors align closely with their ideal coordinates during testing, but green is slightly outside the range of its box. This is fairly common with TN panels, and the XG2402’s greens are not so off as to cause tinting or oversaturate the colors.

Grayscale performance is also good, but not great. In test photos, highlight detail appears slightly washed out, but dark-gray-scale performance is much better, though it has a shadow detail. On the other hand, viewing-angle performance is typical for a TN panel; noticeable color shifting when viewed from extreme side, top, and bottom angle.

The XG2402 is a great buy for anyone looking for a budget monitor that comes with enough that you need for gaming, including a fast 1-ms response rate, 144Hz refresh rate and support for AMD FreeSync. Only slightly skewed color accuracy and thick bezels hold it from being perfect.

There are plenty of great budget gaming monitors in the market, and the XG2402 is among the best around. A top alternative is the AOC G2590FX which packs a similar resolution, response times, but supports Nvidia G-Sync+ adaptive sync and an appealing bezel-less design. If you need something stellar and beautiful, the AOC is an excellent choice.

Yes. If you’re on a budget and not willing to spend more than $300 on a gaming monitor, this ViewSonic XG2402 monitor is a good option.

The is a great buy for anyone looking for a budget monitor that comes with enough that you need for gaming, including a fast 1-ms response rate, 144Hz refresh rate and support for AMD FreeSync. Only slightly skewed color accuracy and thick bezels hold it from being perfect. 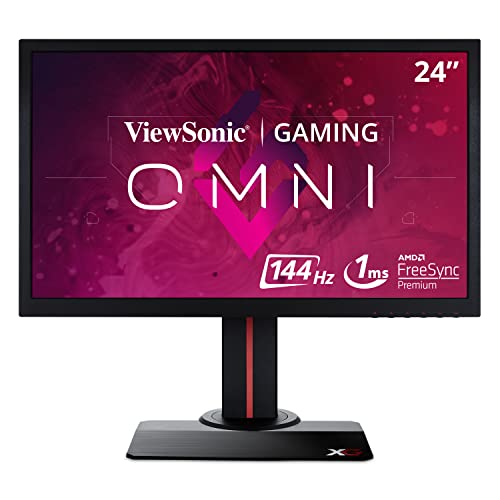