The ViewSonic VX3276-MHD 32-inch monitor is a thing of beauty — even when the display itself is turned off. True to its name, it has a great view with an In-Plane Switching (IPS) panel housed in an unusually thin frame. You don’t pay so much for such slimness; the monitor has a meager port selection and the stand offers only tilt adjustment. The monitor delivers decent color accuracy, barely-there bezels for dual-monitor setup, and superb clarity.

It’s solid for general productivity use, though given the design and screen size, the 1080p native resolution just as easily could have been 1440p. If that’s you desire, the ViewSonic VX3276-2K-MHD is a variant of the model we’re reviewing but offers a higher 1440p (2560-by-1440) resolution for a few more dollars. In fact, the model is configurable up to 4K depending on your budget, but the 1080p base model is still practical for professionals and creatives.

The VX3276-MHD is the same size as the other two ultra-thin monitors released by ViewSonic early this year the other being the 32-inch 1440p and 4K res-displays. This silver-gray monitor’s most notable feature is its thinness. The cabinet measure 28.1 by 9.1 by 19.8 inches (HWD), and it slightly tapers to a some 4mm at the back-bottom edge. The bezel is barely there, almost a quarter of an inch all round, making it a perfect candidate for a dual-monitor setup on a desk.

You can adjust the stand’s tilt, but you don’t have height, pivot or swivel adjustment. The 27-inch ViewSonic VP2785-4K offers the best of both worlds: Tilt, height, swivel and pivot adjustments, 4K resolution screen, and great connectivity including USB Type C.

Our review model comes with a bigger 32-inch display, and only gets HDMI, VGA and Displayport options, but doesn’t include a USB port.  There are two built-in speakers which are reasonably loud, but they sound a bit distorted at higher volume levels.

However, 1080p monitors are still common and very useful especially at smaller screen sizes. The larger the screen, though, the lower the pixel density, so the VX3276-MHD’s pixel density works out to a modest 93 ppi. Practically, 32-inches nearly as large a budget screen as you’d expect on a 1080p monitor, without necessarily compromising the image sharpness.

Compared, both the 27-inch Samsung C27HG70 and ViewSonic’s very own VP2768 with WQHD (2,560-by-1,440-pixel) native resolutions boost higher pixel density of 109ppi. That’s lower than Our Editors’ Choice gaming monitor, the Acer Predator X27, that sports a 4K native resolution and a much higher pixel density (163ppi). These will produce much sharper images than our review unit when viewed at the same distance from the screen, only that they cost slightly more.

Overall, the ViewSonic VX3276-MHD offers a resolution and ppi that should be fine for general professional use and home entertainment. If you’re, say, a professional photographer or a graphic designer who needs very accurate, highly detailed pictures, you might probably need to settle for at least a 1440p panel at this screen size, though. Still, it ideal for light gaming but it has no gaming-friendly features to speak of.

As a general-purpose professional monitor, the 32-inch VX3276-MHD gets the job done. It has some nice styling, such as a nearly bezel-less cabinet, and a beautiful silver exterior and a modern base that you can’t beat at this price point. Its IPS panel does a good job with color accuracy, although a USB port would be better for such a brilliant wide screen monitor.

With a few more dollars, you can miss a better screen. The direct competitor here is the AOC CQ32G1, a 32-inch curved monitor with a curved frameless display, a 1-millisecond response rate, a better 2560-by-1440 resolution and supports AMD FreeSync. If you play games when not working, its feature set counts for a lot.

Yes. If you don’t care much about gaming and want a display that purely focuses on your photography, video or design work, the ViewSonic VX3276-MHD is well worth your consideration.

The ViewSonic VX3276-MHD is a 32-inch professional monitor that uses IPS technology to deliver excellent color and grayscale performance, at a price that’s hard to beat. 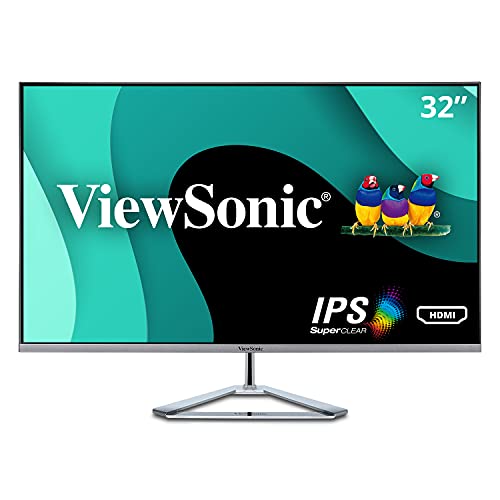