The Lenovo H50 (90B700EEUS) is a budget desktop PC with stellar performance for the price, thanks to a powerful Haswell Intel Core i5 processor (a quad-core chip featuring a high 3.2GHz clock speed with turbo up to 3.4GHz) and sufficient 8GB of memory. In fact, the H50 has enough power and expandability to last at least four to six years before it begins to feel slow.

It comes with some of the features that a general user will need, plus extra memory that will keep the system relevant for far longer than a bargain-basement system with 4GB. If you’re a home user or even some kind of power user, you’ll be happy with this caliber of processing power.

The mini-tower chassis measures 13.98 by 6.30 by 16.14inches (HWD), making it way smaller than last year’s Lenovo H500 (14.5 by 6.9 by 16.9 inches-HWD) and weighs 15.62 pounds. It has a matte-black finish and sports a two-tone black/gray front panel with silver trim. Despite the H50’s roomy interior, upgrade options are limited, although you do get little more flexibility than you do with the Dell Inspiron Small Desktop 3000 Series.

There is 8GB of memory available, and as far as I know, there are two memory slots in this model so the maximum RAM is somewhere around 16 GB. Then it means that the current memory should come in one 8GB stick, so you have another memory slot on the motherboard unoccupied for an extra memory chip. Also, you have a vacant PCI express (PCIe) slot, which you can use to add a dedicated graphics card, but it will have to be a relatively low-end version since the available power supply may not support high-end graphics cards.

It is easy to set up and use, and comes bundled with the Lenovo AccuType keyboard with curved and evenly spaced keys that enable accurate and more comfortable typing experience. It doesn’t include a monitor but a wired keyboard and mouse combo that will fit most users, but might you need better typing and wireless control, you have many options such as the Logitech Wireless Combo MK270, with keyboard and mouse.

Along the top of the panel is a DVD burner tray load and below it are two USB 2.0 ports, headphone and microphone jacks, and a 7-in-1-card reader. This model does come with a DVD RW optical drive, but it lacks a Blu-Ray drive, surely we didn’t expect that in a budget desktop, so you my have to do without if you need it somewhere down the road.

Rear-accessible connectors include two USB 2.0 ports, two USB 3.0 port, a VGA and HDMI-out, hence the system can support dual monitor setup, preferably to an HDTV and three audio jacks with support for 5.1-channel surround sound. You don’t need to rely on cable to get Internet access, the Lenovo has a built-in 802.11A/C Wireless + Bluetooth card (of course a Gigabit RJ-45 port is there, too).

The Lenovo H50 comes with a fourth-generation Intel Core i5-4460 processor with Intel HD 4600 graphics, as well as the aforementioned 8GB of system memory and the 1TB hard drive. The processor on this system are the powerful Quarter 2 2014 release 3.2 to 3.4 GHz speed quad core, although in the in August 2015 we’ve seen the release of Intel’s 6th Gen processor (dubbed Skylake) and many machines are taking it up such as the Editors’ Choice the ASUS M32CD and it other sibling the ASUS M32AD, both of which have remarkable benchmark score.

The Haswell processor on the H50 does deliver responsive performance at even the most demanding tasks at home or office with turbo boost but no hyper threading (offers 4 cores and 4 threads performance). Storage comes via a 1TB (7200rpm) hard drive, a better solution than the 5400rpm drives offered by competitors.

All of these components translate into very good benchmark scores for this system, compared with other budget PCs. It scored over 6635 points on the PCMark 8 Work Conventional test, which measures performance on day-to-day tasks. This is not bad considering this thing is a budget desktop. Be it Photoshop, web browsing, a Full HD video, pretty much every app and program should work lag-free.

The integrated Intel HD 4600 Graphics solution performs as expected, which is to say it can’t handle graphics-intensive gaming. But for family use you’ll experience a decent multimedia output unless you’re planning on playing very demanding game titles of 2015 at higher settings. For casual gaming, you are assured of 30 frames per second (fps) at 720p for most games, but we still insist that the HD 4600 is a feeble processor-integrated unit.

Aside from relatively minor nits, like some bloatware and a basic graphic card, the Lenovo H50 (90B700EEUS) is exactly what we’d recommend if you want value for the money in a new, general-purpose PC. It stands out as a pretty good system for general multimedia stuff like watching movies in Full HD quality, high definition video quality, photo viewing and editing, listening to music browsing the Internet.

It is configured more as a family / home computer that is a perfect choice for daily multimedia needs. The Acer Aspire TC-885-ACCFLi5O remains our Editors’ Choice for home entertainment desktops PCs, featuring 8th Gen Intel Core i5-8400 CPU, Optane Memory and 2TB storage. 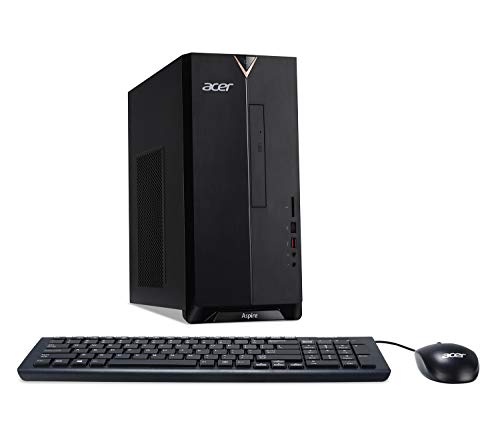