The Lenovo C50 is a full-featured All-In-One PC that will handle all home/office tasks hassle free.It features a high-resolution 23-Inch FHD Screen (with multi-touch option), 8GB system memory, 1 TB hard drive, a fourth generation Intel Core i3-5005U 2.2 GHZ Processor and Intel HD 5500 Graphics, it’s a good choice if all you need is basic Windows-based computing without the drawbacks you had to endure with budget PCs in the past.

It’s fully loaded, with 802.11ac Wi-Fi, a 1MP (720p) webcam and HDMI-in port. This extra power lets you enjoy using the system over the next 4 to 5 years before it will start to feel slow. Its performance and features earn the C50 our Editors’ Choice for entry-level all-in-one desktop PCs. The Lenovo C50‘s components are built entirely into its black polycarbonate chassis. A slim metal V-stand juts off the back of the system and lets you adjust the angle to a comfortable position. The 23-inch Full HD (1,920-by-1080) resolution display is at par with other entry-level all-in-one desktops like the Lenovo C40. Images on the screen are bright and clear. At approximately 15.24-by-22.20-by-2.09 inches (HWD), not counting the extra space for the arm, the C50 can fit on most work surfaces or even a kitchen countertop.

It would have been nice to have 5GHz 802.11a/n/ac support for faster speeds on newer routers, but old-school Wi-Fi is sufficient for most general users. The absence of HDMI-in means you can’t be able to hook up hook up another PC to the system to help extend the useful life of the display, which is an addition for an entry-level PC.

The Lenovo C50 is equipped with a fourth generation 2.2 GHz Core i3-5005U Processor with Intel HD Graphics 5500, 8GB of memory, and a 1TB hard drive. This is a workhorse processor seen in many systems, from ultraportable laptops to the large-screen Lenovo desktops. The size of the hard drive and the amount of memory should be sufficient for a general-purpose user. The internal memory can’t upgraded, but you can switch out the 1TB hard drive for a bigger one yourself (up to 2TB), but most users who buy this desktop probably won’t bother.

That puts it in the same cluster, performance-wise, as the Lenovo Horizon 2 and traditional all-in-one PCs like the Acer Aspire U5 (AU5-620-UB10). That said, the pricier Dell XPS 18 is far ahead on multimedia tasks, thanks to its Intel Core i7 processor and SSD. Gaming is barely worth talking about, with the Intel HD 5500 graphics being the lowest iteration in the line, which means that the C50 can only handle light to medium gaming sessions.

If you’re looking to try out portable all-in-one computing (and pledge to stay near a wall outlet), then the Lenovo C50 is an attractive system at a good price. Aside from a couple of easily correctable issues, there’s not a lot to gripe about with the Lenovo C40. It’s a fast performer with a nice, bright screen, and it has plenty of storage space to house all of your content.

It compares well with the competition, especially its stable mate the Lenovo C40 with almost similar specs and components. Thus, the Lenovo C50 deserves a nod as our Editors’ Choice for midrange all-in-one desktop PCs, and is a recommendable option to have somewhere in your short shopping list. 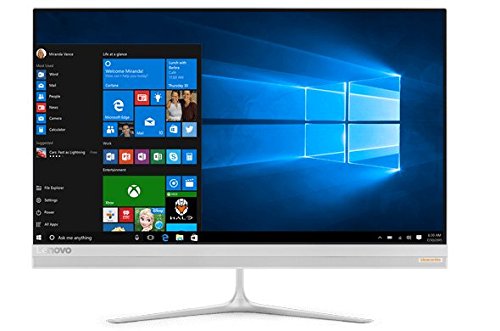