Intel’s Next Unit of Computing line of miniature PCs always appeal to folks looking for versatile, upgradable and upgradable tiny systems. We are used to NUCs being mere bare-bone boxes that often require additional components before they can be used, but the Intel NUC Kit NUC6i5SYH comes functional out-of-the-box with everything you need including memory, storage and Windows 10 pre-installed.

It features plenty of connectivity and enough room to grow into something bigger, making it a good choice for any DIYer, with ease of access to the interior components, if you have to. If you don’t mind saving a few bucks, the NUC6i7KYK will give you solid performance with its Intel Core i7-6770HQ processor and Intel Iris Pro Graphics 580. For bargain hunters, this NUC is a safe bet, and we have no qualms awarding it as our Editors’ Choice for budget mini-desktop PCs. The NUC6i5SYH’s all gray plastic body, with a shiny top edge is very, very small, measuring only 5 by 5 by 5.5 inches (HWD); making it slightly bigger than the Shuttle XPC Nano. Apparently, it is not quite as small as the pocket-sized Intel Compute Stick or the Asus VivoStick, but we can overlook that as it is fully featured and is much faster. At just 2.5 pounds, the NUC has some weight to its build which prevents it from feeling cheap, and you won’t be bothered taking it on a trip.

On the NUC you have a rather unexpected inclusion, a slim LED trim around the ports and Power button, which is a rarity on this sides, as we see such lighting in gaming systems and peripherals. The lights are configurable, sadly, you can only do so through the BIOS. For less experienced folks, even knowing that BIOS exists is a nightmare, though accessing it and configuring is straight forward across Windows PCs.

On the front, encircled by an LED ring, you have two USB 3.0 ports (one with charging capability), a headset jack and the obvious Power button. It packs an impressive set of connectivity options, better than what you get in most laptops. The left panel hosts an air vent, an SD card slot, and a Kensington security slot, while the right remains empty except for some venting. The rear side has two additional USB 3.0 ports, and HDMI port with 4K support and a mini DisplayPort. Wireless connectivity comes via 802.11ac Wi-Fi and Bluetooth 4.2., alongside Intel Wireless Display 6.0.

It comes with 32 GB of flash storage on board, a generous amount that is now becoming standard among stick PCs and other budget laptops like chromebooks. It the same amount of storage you get on the XPC Nano, though the Asus VivoMini VC65-G042Z shines with a full 1TB of storage, albeit at a different price range. Let’s face it, the amount of storage here isn’t in tons, but it’s just enough to store some photos, a few videos, along with lots of documents–but, be careful not to fill it up with high-res clips or pictures.

The NUC6i5SYH’s upgradability comes handy if you need more storage. It is designed in a way that you can outfit an additional 2.5-inch hard drive or SSD alongside the boot drive, which is quite good should you desire more space. To access the drive tray, all you have to do is remove the four screws on the bottom, a really simple solution. All you got to do is be careful with the attached SATA cables as you add more components. The motherboard is placed underneath, with two DDR4 SO-DIMM slots.

This version of the NUC features a dual-core, sixth generation Intel Core i5-6260U (1.8GHz up to 2.9Ghz Turbo) processor with Intel Iris Graphics 540. Our review unit didn’t come with RAM installed, you’ll have to install a few DDR4 sticks in the two SO-DIMM slots available. For a mini PC, this configuration is quite acceptable, as it can deliver solid performance on most tasks, may it be media encoding, day-to-day computing, 4K entertainment and some light gaming. With its speed and feature set, it is the perfect candidate to use as a secondary media streamer in your house, or hook it up to a display, and show a presentation or even show a demo.

It is among the few tiny PCs that are able to brisk through office tasks like spreadsheet entry, word processing, and video chatting without stutters. Yes, these tasks aren’t very challenging, systems with less powerful CPUs can manage decent performance, but the NUC adds some power when you get into multitasking and intensive tasks like video editing. This tiny computer can be realistically used for content creation as well. On the downside, though, power consumption and how loud the NUC can get are things you need to look out for, but they aren’t even that bad afterall.

About the only way to get a less expensive desktop PC than the Intel NUC Kit NUC6i5SYH is to grab a chromebox like the Asus Chromebox M004U, but rest assured it won’t be that powerful, and above all you’ll have to do without Windows compatibility. While this NUC isn’t going to swipe through your complex media projects or suffice as a multitasking powerhouse, it can pretty handle your average daily computing needs without any delays.

If you need more speed and stellar performance in a miniature PC, you would as well look at the Intel NUC Kit NUC6i7KYK Mini PC, with its Intel Core i7 processor and ability to play some recent AAA games.

For most of us, the NUC6i5SYH probably can’t fit the bill as the main PC (not without upgrades). However, the associated benefits in value and versatility mean that it can fit into multiple roles for both neophytes and advanced users, so long as you have a need. 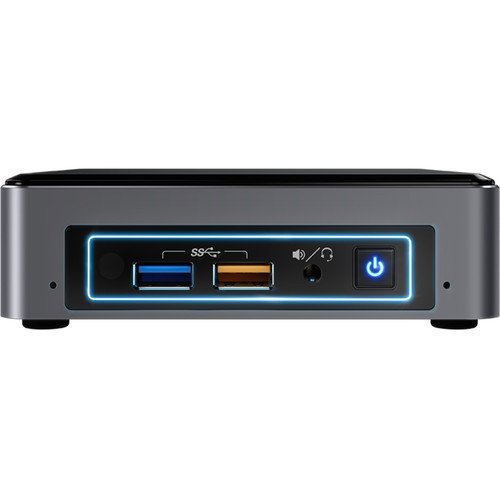