If you’re looking so a super-affordable new TV, the All-new Insignia F30 Series might seem like an appealing choice. Its Fire TV televisions are downright cheap, with the 55-inch NS-55F301NA22 we’re reviewing retailing for hundreds of dollars less its direct competitors – and with the holiday discounts, it can be had for even much less.

On the new F30 Series, the best feature remains the robust and responsive implementation of Fire TV OS and all the versatility that come with it.

We’ve tested some impressive budget-friendly TVs before, but none have been quite this inexpensive, especially for a 55-inch set. The Insignia Fire TV line is simply great value for the money, but if you can spend just a bit more, you can get a superior model from Hisense and TCL.

The Insignia NS-55F301NA22 Fire TV isn’t necessarily the best looking around, but it doesn’t look bad either. The screen is framed by a simple, half-inch black plastic bezel on the sides and top, but it widens towards the bottom. The bottom half of the tv widens upto 3.3 inches, to give it some stability and host extras like ports and built-in speakers. It’s supported by a pair of plain, flat feet – but you can mount it on the wall as well.

It’s a thoroughly simple design, with a minimalist design, only distinguished by a gray Insignia logo in the middle bottom bezel, and a small. Trapezoidal bump on the lower left corner that indicates the position of the infrared remote receiver, and a power/input button on the bottom panel.

Port selection is just fine, with three HDMI ports, a USB port, and a 3mm headphone jack that sit at the back of the TV, facing the left. A little further inward, there’s an Ethernet port, a set of RCA composite video inputs, an optical audio output, and an antenna/cable connector facing down. For a modern TV, three HDMI ports are a bit scant, but we expected that at this price range.

As the name indicates, the Insignia Fire TV Edition uses the same smart interface as Amazon’s Fire TV media devices. As such, once you sign in with your Amazon account, you can access a wide array of apps and services, ranging from Amazon Prime Video(obviously), Apple TV, Disney+, Hulu, Netflix, Sling TV, Twitch and YouTube. Also, you can mirror a compatible Windows PC or mobile device screen through WiDi/Miracast, but unlike current Android and Roku TVs, its neither Apple AirPlay not Google Cast compatible.

You can as well use Amazon Alexa voice control by pressing and holding the voice assistant button on the remote and speaking into the microphone. Talking of remote, the included remote takes its cues from Amazon’s Fire TV streamers, sharing a similarly narrow, rectangular black wand shape with a circular navigation pad near the top. The mentioned voice and power assistant buttons sit above the navigation pad, along with a pinhole microphone.

The All-New Insignia 55-inch NS-55F301NA22 is an LED-backlit LCD 4K television. It supports high dynamic range (HDR) content with HDR10, and supports DTS Studio sound. It produces a sharp picture, overall, and is very close to a great viewing experience with great contrast out of the box.

The modest color and contrast performance is manifested when watching BBC’s Planet Earth II. The sprawling greens of plants look natural, but not as vibrant as they do on TVs wit wider color ranges, including the TCL 55R635 (6-Series, 2021 model) and the flagship LG OLED55C1PUB, though you’ll spend a premium for the crisp picture. Fine details like fur and bark are clearly visible when its well-lit, but they tend to become muddy in shadows.

Gamers will likely be disappointed by the All-New Insignia Fire TV’s performance. Not only is the screen 60Hz without variable refresh rate (VRR), but the input lag is rather high, even in the Game picture mode.

In movie mode, input lag is an unbearable 109.6 milliseconds. In Game mode, the lag drops to a much more reasonable 41ms, but that’s still over twice the lag of the 20ms threshold we consider ideal for the best gaming TV.

The All-New Insignia 55-inch 4K Smart Fire TV Edition is about as inexpensive as a new TV line gets, and it almost matches pricier models in performance. Its picture quality is good at best, with contrast that swallows detail, buts its input lag is high even in Game mode. It lacks Apple AirPlay, Dolby Vision, and Google Cast support, though.

Alternatives in this category include the Hisense H8G, or at least the Vizio M-Series Quantum, but you’ll spend a bit more. The Hisense has far superior picture quality across the board, and a much brighter panel that displays a wider color gamut; while the less expensive Vizio offers even wider color, but not as nearly as bright.

Or, if you can consider spending a bit more than that, the Hisense H9G and TCL 6-Series remain our top picks for affordable – if not quite cheap – TVs. That said, if you’re shopping on a budget and need smart TV features on a bright 55-inch TV, the Insignia NS-55F301NA22 is one of the better bargains for one of the best 4K TVs.

The All-New Insignia 55-inch NS-55F301NA22 is a solid budget smart TV, offering decent picture quality and good sound, and for the price, it’s easily one of the best Amazon-powered TVs yet for a bargain. 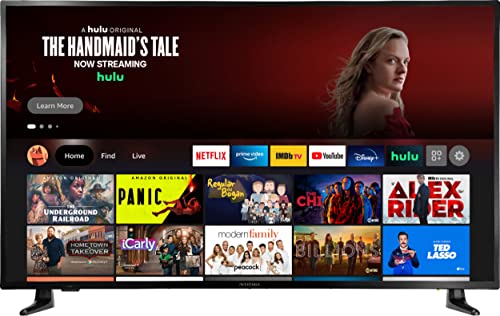