The iBUYPOWER TraceMR 224i delivers 4K gaming with unmatched fluency, and it can push to 8K gaming and 3D rendering, beating all comers in our Core i9/GeForce RTX 3090 configuration.

Though expensive, as is the case with most gaming PCs these days, the iBUYPOWER Pro features a high-quality build, blissful case lighting, and cool design flourishes that satisfy almost all power-user and aesthetic desires.The TraceMR 224i easily claims our Editors’ Choice award for a custom-built gaming desktop in this class.

We’ve seen this (and very similar) chassis from iBUYPOWER for years now, so we won’t spend a lot of time here. The newest model is performance-based, and it even suffices for 3D rendering when not gaming. The iBUYPOWER Trace5MR Case is mostly tempered glass, a quality build that majorly blends in, especially its front panel and side window.

If the exterior styling doesn’t tip-off to the focus of a clean and gaming look, the interior view will. “Clean” is maybe an understatement; iBUYPOWER builds are pristine, with all black and glass fittings, and not a cable out of place. There’s some carefully selected RGB lighting in all fans, as well, for some flair.

The attention to detail and tuning pay off in the systems’ performance, as we’ll find out shortly, so it’s not all for show. The tower’s footprint will take up some room, bigger than some mid-size towers we’ve reviewed before, but not out of the ordinary for a standard build. It measures 19.3 by 8.66 by 18.9 inches (HWD) and weighs 38 pounds.

The front-panel ports are top-panel ports, as the front itself is fully flush with three RGB circles. In total, there are four USB 3.0 ports, two USB 2.0 ports, Ethernet, and headphone and mic jacks. On the RTX 3090 graphics card, there’s a single HDMI port and three DisplayPort connections for dual-monitor setups. Wireless connectivity comes via 802.11AC Wi-Fi.

Nvidia’s newest flagship graphics card boasts 24GB of GDDR6X RAM tucked behind a huge heatsink and is fine-tuned for hardcore gaming and 3D rendering. It replaces the manufacturer’s two top-tier graphics cards from the previous generation, the Nvidia Titan RTX and the RTX 2080 Ti.

For gaming, the RTX 3090 performs so well on even the newest AAA games, with excellent 4K performance, and can even handle 8K gaming at 60 fps, though it’s not quite fluent at that level. So, while predecessors like the RTX 3080 may have set a high bar to meet, the new RTX 3090 has proven up to the challenge.

While this chip is poised to handle the best PC games without breaking a sweat, it’s more attractive to those who need a graphics card for heavy graphical lifting for tasks such as 3D animation and video rendering.

Just like its little sibling, the RTX 3080, the RTX 3090 is built on the Nvidia Ampere architecture, using the full-fat GA102 GPU. The difference is only that it gets 82 Streaming Multiprocessors (SM), making for a total of 10,496 CUDA cores, along with 328 Tensor Cores and 82 RT Cores.

Additionally, it rocks 24GB of GDDR6X video memory on a 384-bit bus, translating to 936 GB/s bandwidth – that’s almost a terabyte of data every second. Having such a huge allocation of VRAM that’s this fast means that if you’re into heavy 3D rendering applications like Davinci Resolve and Blender, you stand to benefit a lot.

Back to gaming performance, we’re going. To say that the Nvidia GeForce RTX 3090 is almost 10–20% faster than the RTX 3080 at more than double the price is an understatement. If you were buying the card alone, we would say that the increase in performance is not worth the price, but since you’re getting it packed into a gaming rig, it’s a killer value.

The RTX 3090 is primarily aimed at the beginning of 8K gaming and professional 3D rendering applications. However, right now, 8K pretty much exclusively exists in the realm of high-end TVs. Meaning, panels aren’t exactly widespread. That will certainly change, but in the meantime, you’ll have to make do with native 4K resolution monitors, which come with a sizable 3–5% performance loss.

Played at 4K resolution, games like Warcraft: Battle for Azeroth and Destiny 2 will average a steady 60-70 fps at this extremely high resolution, but with quality settings set at high, rather than having all the eye candy fired on. This isn’t a big loss as it sounds. After all, the 24GB of VRSM is enough, so you won’t have to turn down textures.

However, if you turn to intense single-player games like Control and even Dark Souls III, you’ll typically see frames in the range of 40s, which is still playable performance. This alone makes the Nvidia GeForce RTX 3090 appealing.

That said, we can’t advise people to start playing in 8K yet. This is certainly the first graphics card we’ve seen that provides actual playable gameplay at this resolution – similar to how the Nvidia GeForce GTX 989 Ti and the Titan X came into the 4K gaming arena back in 2015.

Non-gaming performance is likewise not an issue for the iBUYPOWER TraceMR 224i. That makes sense with a processor like the Intel Core i9-11900KF: 8 cores, 16 threads, and a base 3.5 GHz clock speed that can boost up to as much as 5.2GHz. Combine that with 32GB of RAM and you can do almost anything with this system.

In short, you shouldn’t have trouble getting anything done on the iBUYPOWER Pro. If you work as seriously as you play and rely on highly threaded applications, this is certainly the machine for you. The storage option of a 1 TB solid-state drive and a 2 TB hard drive is great, making this a better choice for gaming and productivity.

The iBUYPOWER Pro TraceMR 224i features a clean and attractive visual design, runs quietly, is easy to maintain, and delivers class-leading frame rates. With the RTX 3090 graphics card, this rig falls somewhere in the middle, just like the HP OMEN 30L. The GeForce suggests that this graphics card (and, of course, system) is aimed at gamers, but the specs and pricing suggest that it’s equally geared toward prosumers that need raw power for intense productivity tasks.

All of this leaves little room for criticism as far as the iBUYPOWER TraceMR 224i is concerned. Of course, it’s a pricey build, but you get more than you pay for. It’s our newest Editors’ Choice for high-end, custom-built gaming desktop PCs. 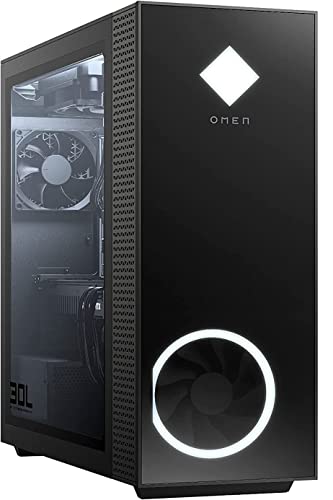