When we reviewed the iBUYPOWER Trace2 9250, we applauded it for a strong feature set including a 9th-generation Core i7 processor, the latest Nvidia GTX 1660 Ti graphics card and lots of storage. For those who didn’t like the minimalist look, the company is now offering some LEDs on the front panel with the iBUYPOWER Element 9260 that has the same components as the Trace2, but set in a different chassis, altogether.

If you need something upgradable down the road, this gaming unit features standard parts and tower, meaning you won’t have issues throwing in newer components. Also, the decision to add a transparent glass side panel gives the machine sleek, and it means that major upgrades will be easy as one would hope.

Measuring 22 x 20.5 x 12.8 inches and weighing 31.6 pounds, the Element 9260 is about the same size as most pre-built gaming rigs, the likes of CYBERPOWERPC Gamer Xtreme GXiVR8060A8 and even mainstream manufacturer’s HP Omen Obelisk, and Dell’s Alienware Aurora R7. It gets a bigger motherboard and a chassis that is spacious enough to accommodate more components.

The machine has a tool-less design, meaning you only have to unscrew four thumbnail screws holding the tinted glass panel – here, you find the motherboard, solid-state drive, RAM and graphics card. The power supply is found on the opposite side beh3ind a metal side panel, while the front panel features a trio of concentric circles behind a transparent glass panel.

Cable work is excellent, and that works well with the system’s ample I/O panels. The top panel has a removable dust filter, separate and microphone jacks, a pair of USB Type-A ports, a power button, a reset button and drive activity lights. On this spot, we’d appreciate a flash-card reader, but it’s a painful omission that has been done here.

Around the back, you have six USB ports (2 x USB 3.0, 2x USB 2.0), Ethernet, and audio 7.1 channel. The new Nvidia GeForce GTX 1660 Ti graphics card also includes one HDMI, one DVI and one Displayport. It doesn’t have a VirtualLink connector, the latest versions of the ubiquitous technologies you’d need to power most G-Sync HDR monitors but found on the Turing RTX 2070 and above.

To connect to wireless networks, there’s 802.11AC Wi-Fi and is Bluetooth ready. Also bundled into the package are an iBUYPOWER Gaming Keyboard & RGB Gaming Mouse. A monitor isn’t included, but you can buy the system with a 27-inch Dell D2719HGF with AMD FreeSync as part of the package.

While the iBUYPOWER Element 9260 is billed as a gaming rig, the feature set makes it a good candidate for pretty everything else. Our configuration ships with a 9th-generation Intel Core i7-9700F (eight-core) processor, 16GB DDR4 RAM, 256GB solid state drive and an extra 1TB hard drive for storage.

Its bigger sibling, the iBUYPOWER Trace 9230 features a high-end spec sheet – Intel Core -9-9900K processor and Nvidia’s new GeForce RTX 2070 (8GB), but the rest of the features are similar. Back to our review unit, the processor and memory combination are enough for web browsing, photo-editing, heavy productivity tasks and some moderate video encoding.

Storage comes in way of a snappy 240GB solid state drive and an additional 1TB hard drive for your large downloads and other large files. We appreciate this storage option, delivering fast 1,249 MB/sec read and 1,012 MB/s write speeds. Both drives and the 16GB RAM are easily upgradable should you find yourself requiring more space for your game files and other documents.

Our review unit is configured with the Nvidia GeForce 1660 Ti (6GB), which isn’t the most powerful configuration preset that iBUYPOWER offers in this chassis. But for enthusiast gamers who need something practical that will remain relevant for years to come, the Trace2 9250 makes for an excellent rig. It includes all the power you need for playing today’s AAA titles at 1080p resolutions.

If you’re gung-ho about 4K, consider upping your graphics card choice to a GeForce RTX 2080 in something like the CYBERPOWERPC Gamer GXiVR8080A4, as the GeForce GTX 1660 Ti in our unit is right on the edge of playability in some of today’s games.

Unsurprisingly, the Nvidia GeForce GTX 1660 Ti with 6GB can tear through games at 1080p resolution and High settings. When you play Battlefield 1 and Far Cry 5 in 1080p with all of the settings on high, it will run between 135 fps and 109 fps. At 1440p, it runs at 99 fps and 81 fps, which is still acceptable for an entry-level GPU. On SteamVR performance, the desktop reaches a perfect 8, making it Oculus Rift and HTC Vive ready.

The iBUYPOWER Element 9260 is a custom-built desktop PC that easily does what it is set out to do, thanks to a solid feature set and an easy-to-upgrade mid-tower chassis. The pre-configured model we’ve reviewed is reasonably priced relative to assembling it yourself from parts.

We don’t imagine anyone doing a cleaner wiring job, and component selection as our review unit is top-notch. Other highlights of the Element 9260 include decent cooling, component expansion, and a high degree of factory customization.

Competitors to the Element 9260 include its own sibling, the iBUYPOWER Trace2 9250 with the same features only that it comes in a tower chassis with few LED bling on the surface.

Another alternative must be the CYBERPOWERPC Gamer Supreme SLC8260A2 that offers an Intel Core i7-9700K processor, an Nvidia RTX 2070 Super (8GB) graphics card, 16GB DDR4 RAM and 1TB NVMe SSD. If you choose the Supreme SLC8260A2, you’ll get a unit that’s more powerful and can support DLSS, offers Tensor cores and RT cores for butter-smooth playability, but the tradeoff is that you’ll pay slightly more.

Still, even if this midrange GPU won’t do much for enthusiasts, most gamers will find the performance to be sufficient for 1080p gaming, and you can always upgrade to a faster graphics thanks to the machine’s upgradeable tower design.

Yes. For its all-round excellence, it easily makes for a choice mid-tower gaming desktop that gets a little better over competitors. The iBUYPOWER Element 9260 performs as it should, and comes at a sweet price considering the components inside. The only thing you’ll miss here are the joys of building your own, if that’s your thing. 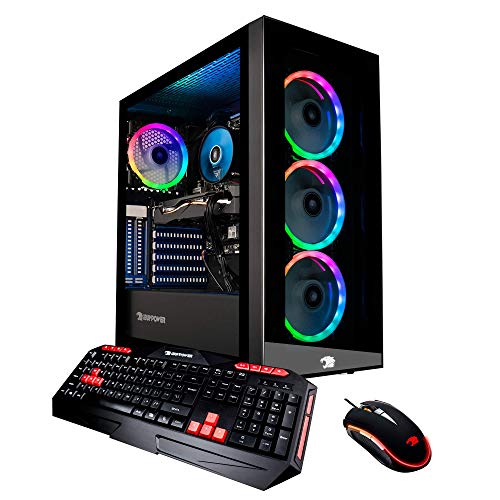