The HP Pavilion Power 580-068 is a high-performance system designed for the graphic artist, whose computing needs are primarily on video editing, media creation and consumption. When not working, it lets you play modern games smoothly. It’s an upgraded version of what you’d called high-end multimedia PC –that was almost five year ago, now they’re simply called mainstream systems.

It features a 7th-Gen.Intel Core i7 processor, a speedy solid state drive (SSD) with additional HDD storage, and a dedicated Nvidia GTX 1060 graphics card. If you’re looking at replacing an aging laptop or a $3000 tower PC, you can consider starting here.

A new design and components wraps the Pavilion 580-068’s aesthetics, though it shares the same looks with the rest of HP’s Pavilion 570 Series. The tower chassis gets the signature black painted side panels, so do the rest of the chassis, except for a green HP logo embossed on the upper front. It’s a spacious chassis that allows you expand the memory and storage down the road.

It measures 14.33 by 6.5 by 14.88 (HWD) inches, which is about the correct size for most worktops. Inside is a 300W power supply, bigger than what you’d find in smaller iterations, just enough for the included GTX 1060 graphics card. If you need to upgrade the GPU to something like GTX 1080, you might have to consider a larger power supply as well. On the front panel is a vertical-loading DVD burner, which is a perfect inclusion for a multimedia system.

The HP Pavilion’s I/O selection is excellent. On the front are: one USB 3.0 Type C port, one USB 3.0, and a headphone/microphone jack. The back host a couple of useful ports including, a pair of USB 2.0, Ethernet, two HDMI out, two USB 3.0, audio (line-in/out), and microphone jack. Also, on the GTX 1060 graphics card are a DisplayPort, an HDMI port and a dual-link DVI port. The USB 3.0 is convenient for external hard drives, while the two USB 2.0 ports can be used for the included keyboard and mouse. Monitor is bought separately, the 23-inch Acer R240HY is a recommendable choice.

For storage, there’s a 128SSD that works as the primary boot drive, with an additional 1000GB hard drive for primary storage. Having an SSD does help in performance, and the extra storage is much welcome if ever you need to edit video or keep a library of photos. Wireless connectivity comes via dual-band 802.11a/b/g/n/ac and Bluetooth 4.2.

For multimedia enthusiasts and casual gamers, the HP Pavilion Power 580-068 is an ultimate performance powerhouse. A quad-core 3.60GHz Intel-Core i7-7700 processor, paired with 16GB memory steers this system to new performance benchmarks. If you need to launch a project immediately, the solid-state drive will have you working in a few minutes. The Intel Core i7 processor gets 10,808 points on CPU benchmark, which is pretty fast for daily productivity tasks.  In case you need to interact with content that requires sleek graphics, the Nvidia GeForce GTX 1060 graphics card (with 3GB RAM) is a perfect match.

On multimedia tests, it puts on a strong showing, just like its AMD-powered iteration, the HP Pavilion 580-148, but still in the same ballpark as the CyberPowerPC Essential GLC4200A. That means, you can comfortably do multiple Photoshop projects, and is a big deal for video encoding and picture editing.

It leads the pack for daily productivity in such a dominant fashion, and manages to stay right up there among the best in category.

Playability is smooth on most modern games, with the GTX 1060 GPU being among NVidia’s Pascal class of chips released last year. Its 3DMark score of 12170 points is enough to deliver solid FPS on most modern games maxed at 1080p. For instance, it gets 112 FPS on Overwatch, 75 FPS on Total War and 114 FPS on GTA 5, all played at 1920-by-1080 resolutions, but can be played at Ultra-settings, though at reduced frame rates.

On these sides of mainstream computing, it’s never easy to find a PC that blends strong performance, nice aesthetics and far pricing. The HP Pavilion Power 580-068 scores well as a desktop computer that will let you complete multimedia projects and play modern games while not gaming, for much less than a laptop with similar components.

Plus, the GTX 1060 graphics card is a newly-released chip with VR support, and has all the requisite ports for a virtual setup. Thus, for solid performance, latest components and reasonable pricing, the newest Pavilion 580 is a winning choice for a mainstream PC. 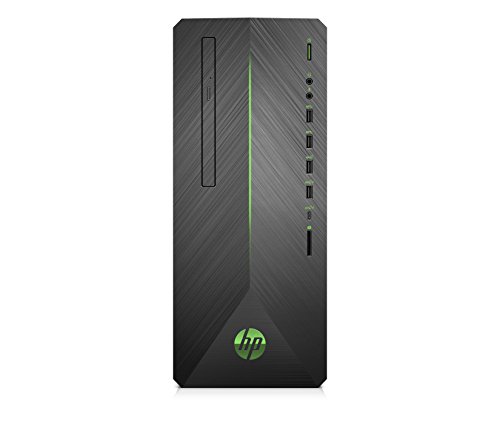