Sometimes you need a desktop PC with a dedicated graphics card, not for gaming though, but for professional tasks like media creation and photo editing. In that case, you don’t need a behemoth on your desk with LED lights allover, rather a desktop with an understated design, packing enough muscle under the roof. Based on that, we have a different crop PCs like the  HP ENVY 750-430, that combines the latest Pascal-based Nvidia GTX 1060 graphics card, lots of memory and a powerful Intel Core i7 processor: A typical configuration for a gaming rig, but targeted for power users.

While you’d be forgiven to use it for play, its best suited for folks who find themselves using media creation suites such as Photoshop, AutoCAD, music editing and other professional applications. Its understated design, notwithstanding, the Envy 750 stands out as one of those systems you can grow with you, and if you’re the type who likes to tinker, then the Envy 750 is something you should be looking at. Expandability, new technologies, multimedia performance, multitasking prowess, and a decent price all factor in for a win. HP have maintained the same minimalist design across its Envy 750 line, and this one isn’t exception. It comes in the same silver-style design, that is smart, sophisticated and stylish hence you can proudly display it in your living room or in the office. At 21.7 pounds, the system is quite portable (at least for desktop standards), thus can be easily moved from one spot to the other in the office without necessarily modifying the entire setup.

The standard-tower design allows it to fit on most work tops thanks to a slim profile that measures 15.79 by 6.5 by 15.95 inches (HWD). If you’re working on a constrained office environment, then here is a multi-purpose PC that can fit almost anywhere.

I/O port selection is also decent. On the top of the chassis you’ll find USB 3.0 ports, one USB 3.0 (Type-C) and a headphone and microphone jack. The back holds a plethora of connectivity ports including two more USB 3.0 ports, two USB 2.0 ports, an Ethernet port, a line in/out audio port and a microphone jack. Wireless connectivity comes via Dual-band Wireless LAN 802.11a/b/g/n/ac and Bluetooth 4.2.

A vertical tray loading DVD burner as well as a 7-in-1 media card reader, come handy in case you need to watch some old movies or transfer files to an SD card. Also, bundled into the package are HP wireless keyboard and optical mouse, which is impressive considering that most come with wired peripherals, though the monitor is not included, but you can always grab one depending on your needs, like the 34-inch Dell UltraSharp U3415W PXF79, Our Editors’ Choice professional monitor.

Well, what’s inside? A sixth-generation 3.4GHz Intel Core i7-6700 quad-core processor, 16GB DDR4 system memory, and the latest Nvidia GeForce GTX 1060 graphics card (with 3GB DDR5 dedicated memory). With such a combination, there are several ways to measure performance including 3D rendering and gaming tests. However, being a professional PC, the fact that it can hit 4.0GHz clock speed in turbo backed by a solid feature set, it goes without saying that the Envy 750 is the real-deal when it comes to multi-purpose computing in the midrange category.

Tested in standard mode, without overclocking engaged — considering that most rivals opt for the perks of high-performing Core i7 processors, it held its own as a surprisingly potent performer. Perhaps this affirms the impressive 9962 CPU Passmark Score, which is a rarity in most desktop PCs of its ilk.

This is almost the same configuration we’ve seen in our Editors’ Choice desktop PC, the ASUS G11CD-DB72. Compared: the latter gains an edge in gaming thanks to the superior Pascal-based Nvidia GeForce GTX1080 GPU that gives it muscle to handle most modern games at butter-smooth frame rates per second (FPS) even and high settings. Also, it leverages multitasking performance with its 16GB of memory and can be upgraded to 32GB, which adds up to more processing power.

This machine comes with a couple of sweet spots, especially when it comes to expandability. Its 16GB of memory is enough for most users, though it can be upgraded to a maximum of 32GB via two DDR4 UDIMM sockets available on the motherboard. For storage, you have a 1TB hard drive at 7200 rpm (rotations per minute) and an extra 256GB Solid State Drive (SSD), that suffices for faster boot times, while the 1TB provides a smart way to store all your downloads, video files among other downloads. The system comes with Windows 10 (Home) preinstalled, though some preinstalled bloatware will require a couple of minutes to uninstall.

The HP ENVY 750-430 combines powerful performance including: Pascal-based Nvidia GeForce GTX 1060 GPU and a quad-core Skylake Intel Core i7 CPU; ample real estate to grow alongside a great minimalist design; and brings, to the competition some forward-looking technologies that will remain relevant for the next 3-5 years. Still, the bald design might be unappealing to some, but it isn’t much of a deal-breaker in such an awesome machine.

On a feature-by-feature basis, the HP Envy stands out as a smart buy for a mid-tower multimedia PC, thanks to a great design that has potential to grow into something bigger, ample storage and a higher tier processor, making it a great value.

That said, if you need a multipurpose PC that you can use for both play and professional content creation, the ASUS G11CD-DB73-GTX1080 is a ready-made powerhouse that will keep you playing on high settings for years to come, making it a desktop that gamers hunting for a bargain should put near the top of their list. 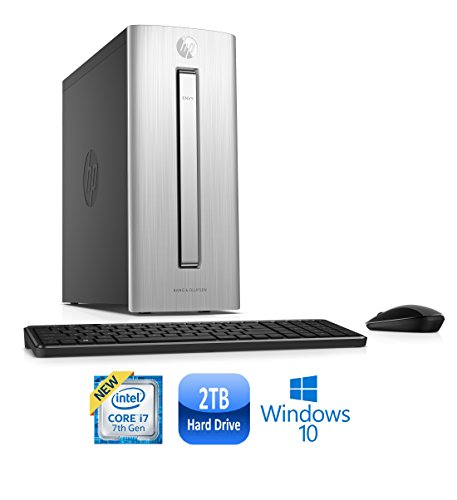