The HP Envy 13-aq0044nr enters a market that is dominated by other sleek ultraportables like the Asus ZenBook and Dell’s XPS 13, all with enough raw power and ultra-thin profiles than we’ve seen in laptops before. HP’s new Envy 13, however, boasts some of the thinnest borders in the business – an impressive 97 percent screen-to-body ration.

Simply put? Almost 97 percent of the laptop’s footprint is taken up by the display, leaving a bezel that’s just 2.5 millimeters thick. That’s the best yet, the closest we’ve come is the Asus ZenBook 13, another thin, premium ultraportable.

Our review unit features a Whiskey Lake 8th-generation Intel Core i7-8565U processor, 8GB of memory and a speedy 51GB solid state drive. This configuration isn’t very pricey as compared to similarly specced alternatives in the market, but you can spend as  as $2000 if you decide to max out on the components.

HP’s new model makes major improvements over our favorite Envy line, and the company is asking for a premium for it. Does the new design and performance boost justify the price, or they’ve killed the magic altogether?

We have seen so many silver ultraportables in the course of our reviews, and sometimes it can be hard to tell them apart. The new HP Envy stands out from the pack with an original tone and signature look. On the outside, the matte aluminum lid has a distinct incline in the back that covers the hinge, as a result you have a 13-inch laptop that’s clean with sleek lines.

There is a shiny HP logo in the middle that looks premium while the tapered shape of the chassis gives the entire profile a slim, chic look. The bottom surface is cut from a supple magnesium alloy.

The lid opens to a beautiful aluminum deck, with eccentric silver keys that match the deck profile (Apple’s MacBooks tend to break the plain color with brown keys, though.) The 13.3-inch screen is surrounded by fairly thin bezels, but not as edgeless as the Dell XPS 13 or Lenovo Yoga C930.

The Envy is slim enough at only 0.57 inches thick, meaning it can slide into narrow pocket in your bag, and compact enough to fit into any back-seat tray. And, its 2.93-pound weight makes it easy to carry along on daily commute. Ultrabooks often sacrifice ports to achieve the thin profiles. Thus, we didn’t expect much in terms of ports on the Envy 13. All you are two USB 3.1 Type-A, one USB 3.1 Type-C (supports Power Delivery 3.0, DisplayPort 1.2, HP Sleep and Charge), one AC smart pin and a headphone/microphone combo.

Another notable inclusion is a microSD card reader and a physical webcam kill switch on the side. The Huawei MateBook 14 features a pop-up webcam on the middle hinge, but HP uses a physical button that kills the webcam electronically and makes it disappear from the system completely. Wireless connectivity comes in way of Intel Wireless AC 9560 802.11 b/g/n/ac and Bluetooth.

Perhaps the major highlight in the HP Envy isn’t even the beautiful design, after all. It has to be the 13.3-inch, 4K (3840 x 2160) touch screen, that deliver accurate, vibrant and high-quality images. Most of us buying laptops for office work or college tasks, but at the end of the day they double up as entertainment gadgets.

With the Envy 13, you can binge on Netflix or Hulu, thanks to a 4K, micro-edge WLED-backlit touchscreen with Corning Gorilla Glass. That’s a lot of acronyms, but it’s the best way we can describe a combination of display tech currently in the market. And on the Envy 13, it looks fantastic.

Contrast ratio is excellent. Every aspect of image quality is boosted on the Corning Gorilla Glass, which you can’t miss, especially if coming from an LCD version. Between the high resolution and dynamic colors, we’re impressed by this display on a laptop that is not overly expensive – and that doesn’t mean it is any cheaper.

HP’s premium laptops always have comfortable keyboards, and it even gets better here. The Envy 13 we’re reviewing gets a comfortable keyboard that you can use for the long college term papers, freelance work and a perfect match for professional creatives.

HP easily undercuts what competitors like Acer and Asus are offering in their midrange laptops, by offering a very thin laptop, that has a world-class typing experience.

Even with tiny keys that have a modest 1.2mm of travel, you’ll not find yourself bottoming out. Right below the keyboard you have a 4.3 x 4.1 buttonless touchpad that’s highly accurate, whether you’re highlighting text or navigating the desktop. It responds well to multitouch gestures such as pinch-to-zoom and three-finger swipes.

Powering the HP Envy 13-aq0044nr is a dual-core Whiskey Lake 8th-generation Intel Core i7-8565U. It also packs up to 16GB of RAM, up to 512GB of SSD storage, and an Nvidia MX250 graphics card. While that’s not the most powerful graphics card in the around, it still is a better option over integrated graphics cards ibn most entry-level notebooks.

It should be sufficient enough for any kind of content creation and video rendering. In fact, most laptops released in 2019 for around this price bear the newer Nvidia MX250, which offers better performance compared to the MX150 base model.

That should be enough raw power for the mid-level PC users and any other professional user, especially the crisp 4K display and the premium portable profile. The Core i7 processor is quite capable, making the Envy 13 among the best in the midrange category. No matter what you throw at it, it responds without hesitation. It should perform extremely well for any productivity task and for some serious content creation as well.

Most modern systems using the SSD technology are equally fast, and the Envy 13 leverages the new technology to deliver much better performance. Most daily operations get a boost: opening applications, accessing and saving files, and loading games is quite immediate and refreshingly quick.

The included Nvidia MX250 in the Envy 13 is primarily to help drive the 4K display and to meet the needs of content creator target market. Indeed, the GPU should help with video editing and the like, but by no means is it a gaming GPU. However, you can get away with casual online-based games.

The HP Envy 13 battery is superb, thanks to an efficient yet fast CPU in the Core i7-8565U, a crisp display that uses half the usual power. With this combination, getting extended battery life is almost assured. Sure, you’re getting up to 10 hours and 38 minutes over continuous Wi-Fi surfing. This is better than you get from most ultrabooks, that average 9 hours, except the Dell XPS 13 that lasts a much longer 11:56.

The HP Envy 13 is a premium 13-inch ultraportable that promises strong performance for students, office users and professional creatives, but costs much less than its closest competitors. On design, it gets minor touches over its predecessor from last year, but the newer hardware makes it an even exciting choice that’s very fast, lasts a very long time on a single charge, and feels great in hand.

The most direct competitor must be the 13-inch Dell XPS 13. It’s more solid, but not so much that you would notice unless that’s exactly what you’re looking for. It also uses the newer 8th-gen Whiskey Lake CPU and can last longer than the Envy 13 away from a plug. On the other hand, if shopping on a budget, the
Lenovo Flex 14 is an excellent 2-in-1 convertible that offer solid performance in a stylish chassis. 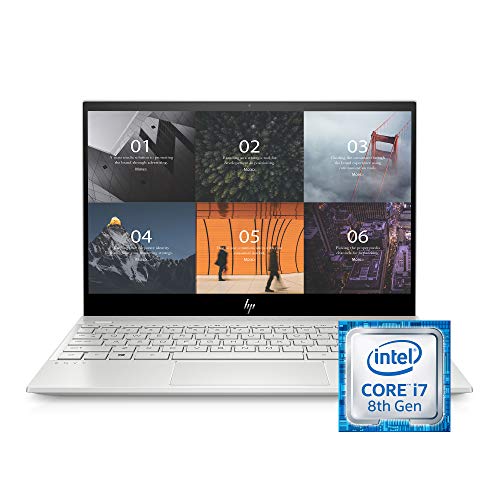