Don’t have lots of spare cash but need a need laptop? Most probably, you don’t need anything super powerful – maybe something for accessing the web, creating and editing basic documents, and watching some YouTube and Netflix. If that’s you, something like the HP Chromebook 14a-na0020nr should serve you well.

The HP Chromebook 14 starts inexpensively for an Intel Celeron N4000, 4GB RAM, 32 GB eMMC storage and an HD (1,366 x 768) resolution 14-inch display. HP also offer a touch-screen version, the HP 14a-na0040nr with a touch screen display, if you need one. Both options offer good advantage and might be worth investing your very limited budget.

The HP 14a-na0020nr isn’t exactly what you’d call a high-end PC, but it’s a slick, well-designed piece of equipment. The chassis measures 0.7 inches at its thickest point. At 3.24 pounds, its reasonably light, but not as much as the 2.58-pound Asus Chromebook Flip C436. That extra weight gives you more ports on the chassis, though, and the Chromebook 14 doesn’t feel at all heavy on hand.

The case is made from plastic, but the ceramic white color looks like the aluminum construction on Apple’s MacBook Air. However, it doesn’t look or feel cheap, and it doesn’t have any exposed screws, so you won’t need to get worried of a loose screen popping out randomly.

Port selection is excellent here, at least by Chromebook standards. The left-hand side holds a USB Type-C port (enabled for charging), a micro SD reader and a headphone/microphone combo. On the right-hand side, you have another USB Type-C port and a USB Type-A port, in addition to a pair of B&O speakers on each side of the keyboard deck.

The HP Chromebook gets a stellar keyboard and trackpad. The backlit keyboard feels responsive with clicky keys that offers plenty of travel. It does flex ever so slightly when you pound on it, but under normal use, it isn’t disappointing at all. My only gripe is the lack of dedicated Caps Lock key; in its place, you have a Search key and must be triggered while holding the alt key.

Not a big deal, though, but it makes it a bit difficult to impulsively reply to a tweet in caps. The touchpad is equally excellent. Here, you have a big and spacious trackpad, with plenty of room to mouse around. The entire trackpad is a button, so you really don’t have to move your fingers around to find the left-and-right-click buttons.

With a 1,366 X 768-resolution display and a 1.1GHz Intel Celeron processor inside, this Chromebook 14 is the mid-tier model that HP offers for budget buyers looking to get productive at home, office or even college students. It isn’t particularly a technical powerhouse by modern standards, partly due to Chrome OS’s minimal bloat and speedy performance, but that doesn’t matter. Almost.

If we were to compare the Chromebook 14-db0003na, based on the specs, it would be an equivalent of the Intel Celeron-powered Samsung Chromebook 4 or the Lenovo Chromebook C340, only that both competitors boast Intel Celeron processors and have better 1080p resolution displays. The HP also includes 4GB RAM and 32GB of onboard storage, which is better than the 16GB storage on most Chromebooks.

Since Chrome is designed with cloud storage, the thin local storage on the HP Chromebook 14 isn’t as big an issue as it would otherwise be. Still, it gets Google Play Store support, and like latest Chromebooks, you have access to the millions of Android apps, just like you would on an Android phone or tablet.

Our review unit, the HP Chromebook 14a-na0020nr is more than fast for day-to-day tasks, provided that you keep your multitasking appetite at the very minimal. You’ll notice occasional stutter under heavy use, videos would drop frames, or scrolling would lag a bit. However, with more casual web browsing and other basic use, such stuttering gets rare, so you shouldn’t run into problems too often.

HP claims that the Chromebook 14’s 2-cell 47-watt-hour battery can last over 13 hours 30 minutes on a single charge. On real-world use, you aren’t getting that long of run time, though. The HP 14a-na0020nr manages over 10 hours, 39 minutes on a single charge when playing a 720p video file on VLC on loop (50% screen brightness, 50% volume with headphone plugged in). Still, that’s enough juice to see you through a full day at school or work.

A Chromebook isn’t going to be as flexible as a full-on Windows PC or a Mac. No matter how Google attempts to dress things up – including Play Store integration, with systems like the HP 14a-na0020nr we’re reviewing you’re still relying heavily on web apps to get work done, and certainly such restrictions aren’t cut for everyone.

Still, for the price, slick design and excellent battery life, the HP Chromebook 14 is a great value for those looking for a basic web browsing machine. It’s more affordable than the Google Pixelbook Go while offering the same screen size. The ASUS Chromebook Flip C436 serves up some stiffer competition, with a 2-in-1 design, newer components, a metallic construction and more SSD storage – and, you pay more.

But, for a reasonably modest investment, the HP Chromebook 14a-na0020nr stands out as a responsive, friendly notebooks that’s actually fine to use at home, work or college. 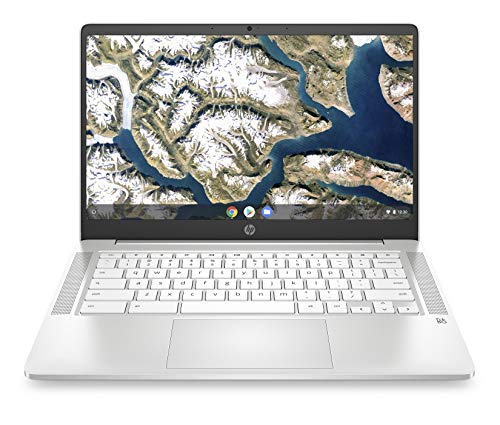