The HP 24-f0010 is a budget All-In-One PC, designed for the creative artists who require the flexibility of an AIO desktop for basic productivity and multimedia needs. Its feature offering, though, is basic especially when compared with competing AIOs like Acer’s Aspire C24-865-ACi5NT, but for the price it is a value buy. If all you need is a desktop PC that gets the job done with little or no fuss, the HP 24-f0010 is worth a look.

Having a desktop PC on your desk bearing a white footprint isn’t that attractive, but somehow HP managed to cut some slack in a while 24-inch AIO that looks attractive. I wonder how they did it, but it looks pleasing out-of-the box, with a unique styling that is not commensurate of the black/silver AIOs we’ve seen in the market. The HP 24-f0010’s components are housed in the 16.52 x 0.62 x 21.3-inch (HWD) casing, that weighs 13 pounds.

The 23.8-inch IPS screen is supported by a four-legged stand, making it quite stable unlike the two-legged stands you get on most all-in-one desktops and monitors out there. There is a webcam and microphone on the upper bezel, while the bottom bezel holds the built-in speakers. Just like its predecessor, this one gets a 1,920-by-1,080 resolution with antiglare coating, too. It isn’t very bright, but acceptable for the price you’re paying.

A 1080p-res screen is better compared to the previous 720p screen, offering a robust experience into general web browsing, YouTube videos consumption and reading emails. The built-in speakers are audible, offer clear sound and are not affected by sound distortion.

This AIO gets al ultra-slim DVD tray, something most mainstream PC makers are dropping from their product offerings. The optical drive rests on the right side, and next to it is a three-in-one card reader, as well as a power button at the bottom. All other I/O ports are located on the back including: two USB 2.0 ports, one USB 3.0 port, an Ethernet port, a DC power-in input, HDMI port and a headphone/microphone jack.

Bundled into the package is a wired mouse and keyboard that will occupy the available USB 2.0 ports, leaving you with the single USB 3.0 port for your peripherals. Wireless connectivity comes via 802.11b/g/n Wi-Fi and Bluetooth 4.0.

Storage comes by way of a 1TB 7,200rpm hard drive, which should be sufficient for most users. A solid-state drive (SSD) storage option would be better, or an Optane Module, but both options will only rake the price higher.

Powering the HP 24-f0010 is a 1.50GHz quad-core Intel J5005 processor, 8GB RAM (user upgradable to 16GB) and Intel UHD Graphics 620, a not very powerful combination, but just enough for daily computing pursuits and media consumption. You won’t indulge in 3D editing on this PC, but it lets you open up to 10 browser tabs, stream full HD YouTube videos lag-free, and edit a few spreadsheets on the side.

As specced, the HP 24-f0010 is targeted for the casual media consumer, and anything like gaming will be a tall order. It will take a few hours to encode heavy media files, for which you need a more powerful computers for such tasks. The same applies to gaming, you aren’t getting any playable frame rates here. Again, at this price point we didn’t expect it to be. If you must play on budget, check out the likes of CYBERPOWERPC Gamer GXIVR8020A5 or the Dell i7777-7569SLV-PUS All-In-One PC, both with dedicated graphics cards.

With a budget of around $500, getting a desktop PC for daily use is never impossible, but getting one with solid performance is usually unheard of. The HP 24-f0010, however, is on a class of its own, offering good performance, a bigger, bright display and handles simple tasks very well. Granted, it doesn’t have a touchscreen and SSD storage option, it still delivers on what it is designed to do. If you need a simple, functional AIO without spending too much, the HP 24-f0010 is definitely the way to go. 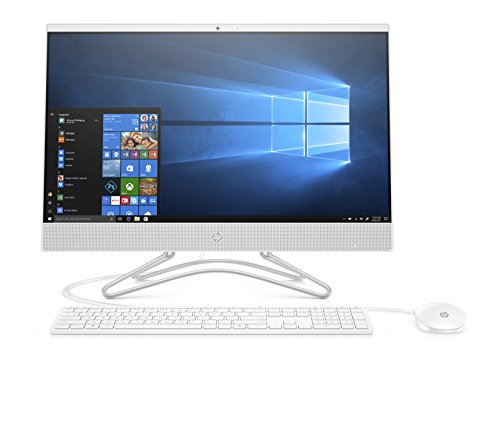