by Lamec M.
in Kitchen If you are or aspire to be an expert baker or chef, then a kitchen mixer is an absolute must-have. An electric mixer takes a basic recipe and kicks it up a notch. It mixes ingredients perfectly and is quicker than by hand, saving you time.

When going for a stand mixer Size, speed options, features, accessories, and price tag are some of the top considerations for many consumers. Hamilton Beach 64650 6-Speed Classic Stand Mixer stand to offer all these considerations.

This Hamilton Beach Classic Stand Mixer lets you determine the best tool for the job. Kneading a batch of sticky dough. Let the stand mixer do the work. Blending a quick dressing. Remove the hand mixer from the base to achieve the fast results you want.

That sort of versatility is what an interchangeable hand/stand mixer can offer your kitchen. The Hamilton Beach Classic Chrome Hand/Stand Mixer includes a variety of attachments, including:

What we liked about it

You’ll marvel at how much time and effort the Hamilton Beach Stand Mixer saves you in cooking and baking tasks. The powerful machine multi-tasks so well you’ll feel like you have your own personal sous chef at your side. The wire beaters transforms heavy cream into stiff peaks in minutes, the flat beater whips up cake batters and cookie dough in record time, and the whisk beater means you’ll never again wear yourself out beating a dozen eggs for a giant family-size omelet.

The Hamilton Beach Mixer has a powerful 290 watt motor and 6 different speeds to gently fold ingredients or brutally beat butter into submission. The roomy 4-quart bowl is adjustable for easy access and the head of the mixer detaches so you can use it as a hand mixer for smaller cooking and baking jobs. When you need an extra boost of power, just touch the Quickburst button. 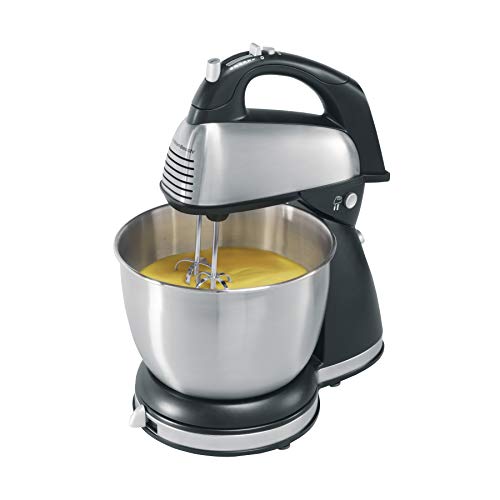