by Lamec M.
in Appliances Eureka Razor Powerful Steam Iron Burst, Non-Stick Ceramic Soleplate with Auto-Off Super Hot 1500...
out of stock
as of January 27, 2023 5:02 am
SEE IT
Amazon.com

Sometimes finding the right iron isn’t easy as we assume it to be. It becomes even complex if a steam iron is part of your budget. Generally, steam irons are bulky and relatively expensive than regular irons, and most of them deliver superior ironing power than others. For instance, Eureka Razor Steam Iron is one of the few steam irons in the market that delivers an impressive 1500-watt dry steam, thus reducing the time you’d spend ironing through fabrics considerably.

It features a steam surge, vertical steam and water spraying functions that will work on most fabrics. With the steam surge technology, you can conveniently steam upwards or in bursts by simply pressing a button.

This multi-faceted iron offers you many steam settings. This Eureka Razor Iron comes with a 10 Foot Electrical Cord with 360-degree pivot. The large water tank holds up to 9 oz. This iron also features an LED indicator light and a Grip-soft Rubberized Handle for a firm but comfortable hold. This iron box has Nano-Ceramic Shield Sole-plate this is a new concept in even heat distribution with no static cling.

It has also been enhanced with 3-Way Auto Shutoff a safety feature that turns the iron off if it tips over or is left on. The anti-Drip Feature Prevents water leakage even at the lowest setting. Self-Cleaning Button cleanses mineral deposits. It allows you to clean impurities from the steam chamber and vents with little-to-no effort. Ergonomic thermostat knob provides a precise reading of settings.

If you’re in the market for a steam iron, price shouldn’t be the best indicator of how quickly it can banish creases. We’ve seen models that are Best Rated but cost almost half the price of inferior models. However, look at the feature-set, power output among others. Keep in mind that steam irons are designed to produce vast amounts of steam for longer, thereby, making light work of large piles of fabrics to be ironed.

The Eureka Razor Steam Iron delivers exactly that, and is therefore a recommendable purchase. The fact that it holds around three times as much water than regular steam irons makes it even better than most expensive steam irons. 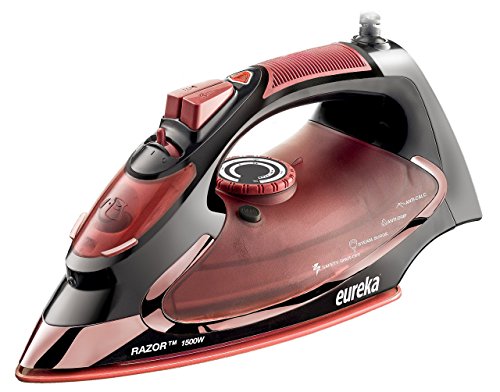