The Dell XPS x8900-631BLK is the latest tower desktop PC from Dell with enough real estate for expandability and a true Core i5 quad-core processor. With a 6th Generation (Skylake) 2.7GHz processor and NVIDIA GT 730 2GB DDR3 graphics card.

The XPS x8900 is equipped to handle most of your home productivity and multimedia tasks, like editing photos and encoding videos for your small business, and enough graphics chops for some serious gaming for budding enthusiasts. The Dell XPS x8900-631BLK is a standard tower, with a glossy black front panel, shiny chrome accents, and a honeycomb grill for ventilation. In most respects, it looks just like last year’s model from the same line, the Dell XPS 8700. On the front of the system is a tray loading (DVD RW), along with two USB 3.0 ports and a multi-format card reader. In the system, you’ll also find some room to grow, thanks three vacant hard drive bays for expanded storage and four DIMM slots for RAM expansion. It comes with a wired keyboard and mouse, but the monitor is not included in the package you’ll have to buy it separately.

On top of the tower is a recessed tray for setting a smartphone, external hard drive, or other device, and two additional USB 2.0 ports (one with power for charging your gadgets), and jacks for headphones and microphone. On the back of the tower you’ll find six additional USB ports (four USB 3.0, two USB 2.0), Gigabit Ethernet, several video outputs (DisplayPort, DVI, HDMI), and outputs for audio and Digital Surround Sound. For networking and wireless connectivity, the XPS x8900 is outfitted with a DW1801 card for 802.11n Wi-Fi and Bluetooth 4.0.

The combination of a Skylake 2.7GHz Intel Core i5-6400 processor, 8GB of system RAM, and NVIDIA GT 730 with 2GB DDR3 of video RAM provide the XPS x8900 with plenty of productivity horsepower and some decent gaming chops. Its PCMark 8 Conventional score of 3,148 topped our Editors’ Choice the Asus M32CD by more than 410 points, but it is still 78 points shy of its older sibling the Dell XPS x8900, with its 16 GB of system RAM, NVIDIA GeForce GT 745 4GB DDR3 GPU and 1 TB storage and Windows 8, while the former comes with Windows 10 pre-installed.

The NVIDIA GT 730 isn’t a high-end graphics card, but it offers enough GPU power to satisfy all but the most demanding gamers. It managed 112.8 frames per second (fps) on our Heaven gaming test while running in medium quality mode (1,280-by-720 resolution) while its other iteration the Dell XPS x8900-2506BLK, with 16 GB RAM returned 118.4 fps, and we hope that the 32 GB iteration of the same model – Dell XPS x8900-8756BLK-will offer even better gaming scores.

As a multimedia desktop, the Dell XPS x8900 looks, from a distance, like a prosumer system that is perfect for the user who wants to dabble graphics arts, video editing, and some serious gaming. On the same model, you’ll be spoilt of choice to choose from different configurations such as a minimum of 8GB RAM and a maximum of 32GB, a minimum of 1000GB storage and a maximum of 2256GB, and you can even choose between Intel Core i5 or Core i7, as well as the GPU of either AMD Radeon R9 or NVIDIA GeForce to be outfitted into your system.

As a multimedia desktop, Dell’s latest release in the XPS line of desktop PCS, the Dell XPS x8900-631BLK is a mid-range prosumer system that’s perfect for users who really want to able with some bit of graphic arts and media editing while still playing some latest titles in the gaming arena.

The inclusion of a 6th Gen. (Skylake) Intel Core i5-6400, enough RAM and 1TB storage that can still be upgraded and an NVIDIA GT 730 graphics card make it one of the more potent mid-tower PCS on the market, and it will continue to hold its own four or five years down the road. 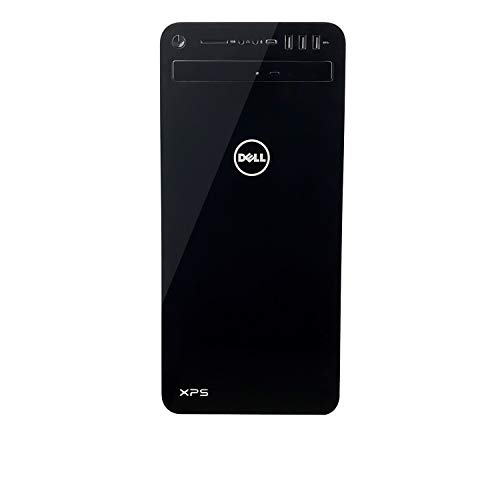