Eggs are one of the simple, yet confusing ingredients to master. It’s either you get it correct from the start, or have them horribly overcooked in just a few seconds.

If you’ve been making attempts and getting them raw, the Dash Rapid Egg Cooker is worth having, as it takes the risk out of handling this delicacy by automating the process as much as possible. Plus, it gives you the flexibility of trying out different preparation styles from boiling, poaching to steaming. The Dash Rapid Egg Cooker is a tiny appliance constructed from plastic, with a design meant for the modern kitchen countertop. At 6 inches tall, 5.5 inches wide and 5.5 inches depth, it will easily fit on any kitchen space so you won’t have to move any existing appliances to create space. Looking at, you might take it for a kid’s toy thanks to its round, pot-shaped design that’s split into two.

On the lower half is a 360-watt electronically powered heating plate alongside a basic power button. The upper part of the Egg cooker is a clear-domed lid that lets you see the eggs as they boil or cook. Ideally, it’s a fancy kitchen gadget that gets the job done without a fuss.

To use it, simply fill the cooker’s included measuring cup with water to match the egg type you’d like to have. On the cup, there are marked fill lines for various egg types: Hard, medium and soft, all on one side, while the opposite side is labelled “omelette/poached” if you opt not to boil the eggs.

Then, empty the water you’ve measured into the gadget’s metallic warming plate and put the boiling tray (a plastic plate with six-egg sized holes) into position, on the top. You can boil up to six eggs that go into the tray in their shells bottom. Also, there are two other trays, for poaching and preparing omelettes.

In the included manual, Dash recommends that you spray the eggs with a small amount of cooking oil to avoid them from sticking to the surface, as well as easy of cleaning. It also instructs that the cooker should be cleaned by hand. Still, you’ll find that cleaning is very hassle-free since the cooker is so small. While billed to be a “Rapid” egg cooker as the name says, the Dash Rapid Egg Cooker takes a few minutes to heat ingredients. It’s isn’t so rapid after all. For example, boiling two big eggs with enough water in “medium” consistency will require anything from 9-11 minutes, while poaching the same eggs will require around 13 minutes to reach your plate. If you do less that, you’ll have to do with under-cooked eggs.

Even so, it is almost double the standard 6 minutes 30 seconds you’d usually need to cook the same eggs on the stove in a pot. Similarly, you can have your scrambled eggs in around 1 minute in the microwave, although with a weird texture.

It’s only after you follow the advice tucked in the Dash’s manual that you can crack less cooking time with spectacular results. The device’s manual explains that its calibrated for large eggs with clear cooking times to match. That means that extra-large and jumbo-sized eggs will take a little longer to achieve the desired results.

As a result, going by the advice in the manual, two large eggs boiled for 12 minutes will be truly excellent with well-cooked yolks up to their centers. While on the same, large eggs boiled to medium texture will come out absolutely fantastic, too. Impressive.

In both instances, the Dash Egg Cooker’s buzzer might go off a few minutes ahead before the eggs cook properly, meaning you’ll have to use a timer or babysit the cooker to achieve consistent results. The built-in alert is loud and you won’t surely miss it even when out of the kitchen.

Whether you’ll have the $20 Dash Rapid Egg Cooker on your kitchen countertop or not depends on the kind of egg fanatic you are. Mine has no boundaries, so any gadget that promises superbly cooked eggs and versatility to poach and prepare an omelette from time to time without much fuss is a perfect shoo-in, worth $20. In fact, I won’t mind paying even more if it had a functional digital timer for automatic the entire process.

And, it doesn’t take away the fact that you can probably accomplish the Egg Cooker’s functions with your existing kitchenware you already own, including pots or a microwave, so this isn’t one of those must-have appliances. All you have to keep in mind is do the dishes once you’re done. If you want to avoid the dishes and the uncertain of eating under-cooked eggs, the Dash Rapid egg Cooker is for you – a do-it-all gizmo that gets the job done without much mess or fuss. 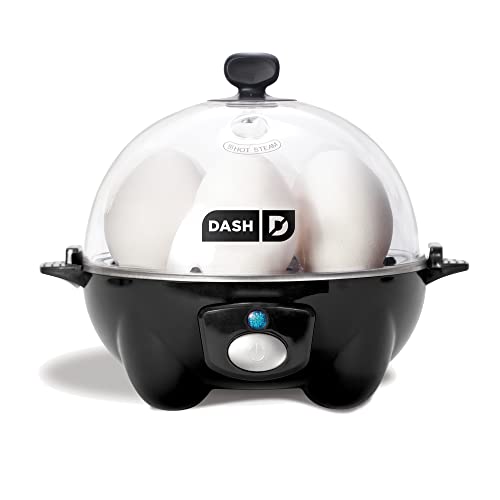