by Lamec M.
in Projectors

When we travel away, or when we go camping, many of us will wish to bring along home comforts. That’s the premise of designing portable projectors like the Auking Projector, as they enable, they bring along the big screen experience without having to lug a 55-inch or bigger screen along with all other vacation itineraries on a break.

To deliver the perfect portable projector experience, many have tried, but few have succeeded. Is the Auking portable projector one of those that deliver on the promise of portable, affordable projection, or does the balancing act between practicality and portability beyond its skillset?

Portable projector designs tend to be less predictable than their bigger home and office counterparts, as there seems little consensus on what form factors work or not.

Look at, for example, Samsung The FreeStyle Projector which sports a cylindrical shape in a pint-size but delivers up to 100 inches of FHD HDR projection, much better than big-sized home-office projectors. With the Auking Projector, you’re getting a white mini projector with a lens on the left side and an adjustment wheel on the top, and comes with a lightweight black remote.

Measuring 3.15 x 6.69 x 7.68 inches and weighing 2.8 lbs, this projector is small enough to carry along to all your outdoor destinations with ease. All connection ports are located on the right side – including HDMI, USB, VGA, AV, and a power inlet. And, beneath the projector, you’ll find tiny legs and a fan.

Like many portable projectors, this is an LED illuminated projector with a 1920 x 1080 resolution panel, meaning it can accept a maximum of 1080p resolution content.

As it is mains powered, the maximum power output of the LED bulb is 7500 lumens, and depending on the brightness setting used, a life expectancy of 55,000 hours is possible.

That’s a useful amount of life for a budget projector, as the bulb can’t be replaced. When it fails, and eventually it will, this device is toast, sadly.

To put lumens output in perspective, typical mains-powered 720p or 1080p projectors usually generate at least 6,000 ANSI lumens and have a bulb life of 50,000 hours.

With 7500 lumens available, this is a projector that you can use even in daylight, but it may not be as crisp as some high-end projectors in the market with more ANSI lumens.

Another consideration is the brightness that curtails how big the projection can be before the image degrades dramatically. Even with ambient lighting, the Auking projector can deliver between 35-170 inches wide, and with some darkness, the image gets even better.

That said, 1080p digital content wasn’t created to be seen at 72 inches or larger, as it reveals its recognizable resolution limitations. Where the Auking projector surpasses others in the same price range is the number of devices it supports. You can pair it with pretty any device – smartphone, laptop, PS4, DVD player, a USB drive, or slot in a memory card. Simply put, having HDMI is standard and welcome, but adding a USB is even better.

For actual projection, the Auking projector does a fairly decent job in medium-lit rooms. You can set it up in any room which has a good amount of light streaming in, and the projected image will still be bright enough to be seen clearly, including text.

In a completely dark room, the image quality improves massively, so despite the Auking projector churning out 7500 lumens, it’ll be bright enough for most living rooms to project onto a blank wall, it will easily replace TVs like the Insignia NS-55F301NA22 from your living room.

Sound from the internal speakers is audible but not loud enough to hear both vocals and music clearly, but when the projector is placed in front of you, the audio isn’t badly off. Should you choose to ceiling-mount the Auking projector, you’ll have to figure out a better audio solution. But for a quick movie night at a friend’s place or music at night, you should be perfectly fine.

Speaking of gaming, the Auking projector does well when connected to a Nintendo Switch for a bit of Mario Kart fun. Colors are clear and bright; you can choose to project at Full HD at 60Hz or 75Hz. There’s decent performance on both modes, so whether you’re playing via a PC or console, you’ll get decent frame rates and little discernible lag.

Should you buy the Auking Projector?

Not sure what to think about the Auking projector other than the concept had potential and has been realized at a great price.

As a portable projector, it’s brighter than some we’ve reviewed but still not bright enough to be your main entertainment screen. Its zoom control is limited and the native 1080p resolution isn’t enough for many uses, and its gaming potential is suited for casual gamers. Still, for the price, it offers more bang for the buck than most budget, portable projectors.

If you’re looking for an affordable, portable projector for casual viewing escapades at home or away and can regularly use the Auking Projector in a mostly darkened room, then it’s worth getting to enjoy a private cinema experience.

Otherwise, if you’re not on a tight budget, the XGIMI Horizon Pro 4K projector remains our Editors’ Choice for portable monitors, offering up to 1080p projection, Harman Kardon speakers, automatic vertical keystone, Android TV 10.0 built-in and up to 2200 ANSI lumens for the most immersive viewing experience anywhere.

The Auking Projector is a refreshed version of its 2021 predecessor, now offering more lumens, decent 1080p projection, and up to 170 inches of projection all at a very reasonable price. 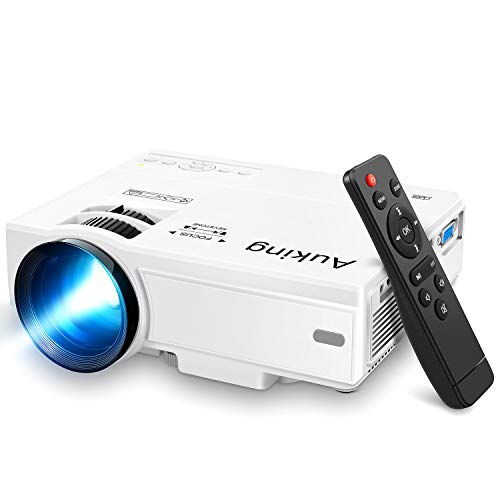