Asus has been on the front line of the Ultrabook’s DNA from the beginning. The Asus ZenBook was one of the first Ultrabook products, and was among the most affordable. The ROG Strix was the first Ultrabook with a GTX 1070 graphics card. Acer refined that idea with the ZenBook 3, one of our favorite Ultrabook choices so far. And then came the ASUS ROG Zephyrus S, a radical and expensive gaming machine that’s among the thinnest, lightest and quickest Ultrabooks available.

But that doesn’t mean the company has abandoned the traditional laptop. Asus has been among the world’s leading notebook manufacturers in recent years, and still retains a very flexible product line. So, it never surprises us that Asus continues to launch ultraportables long after it has properly embraced the Ultrabook concept. One such laptop is the ASUS VivoBook E203MA.

The VivoBook E203MA’s features, not its size, are what disqualify the computer as an Ultrabook. It doesn’t include a solid-state drive, meaning it has no Intel Instant on and Smart Response. The omission reduces the laptop’s price. Asus will sell you an 11.6-inch VivoBook for a price that includes hardware that is otherwise similar to an entry-level Chromebook.

An 11.6-inch laptop with an Intel Dual-Core Celeron N4000 processor for the price looks promising on paper. Can the VivoBook E203MA stand up to real-world use, or the low price has sacrificed everything? Let’s find out.

The VivoBook E203MA is a budget laptop, and it feels exactly that. It gets a nice honeycomb lid with a silver Asus logo in the middle, and the party ends there. The body is cut from plastic, with a convincing build quality that doesn’t have gaps or sharp edges on the outside. The lid tends to be a fingerprint magnet, which is common in budget laptops. Once you flip it open, there is an 11.6-inch screen, surrounded by a thick bezel set on a gray plastic deck. On the VivoBook E203MA, there is an 11.6-inch display with a max resolution of 1366-by-768, which is not exceptionally bright like you’d find on a Chromebook going for the same price. If you will be using it for movies, be prepared for washed out colors, thanks to a low 45 percent sRGB color gamut, which is below the 64 percent cover you’d get with the Lenovo 120S, with the HP Stream covering a bright 82 percent. Above the screen is a 640-by-480 camera, which is almost vestigial with color and almost colorless visuals.

Surprisingly, this laptop gets a fairly comfortable keyboard with 1.7mm key travel that doesn’t require much effort to press the keys. That is impressive, but the keys are cut from cheap plastic and the small body doesn’t leave enough room to rest both hands. The touchpad measures 4.1 by 2.4 inches and adapts well with Windows 10 S gestures, that come pre-installed with the system. From the onset, I have made it clear that this is a basic laptop targeted for college or basic home tasks. Powering it is a dual-core Intel Celeron N4000 processor with a base speed of 1.1GHz, but can hit 2.3GHz on both cores. This is alongside 2GB RAM and 32GB eMMC flash memory and Intel HD 500 graphics that are only sufficient for simple MS Office and web applications such as mail and music streaming.  The 32GB flash drive may not offer tons of storage, but will get you going for basic tasks and can always be supplemented by an external hard drive.

Battery life is painfully short, with the 2-cell battery offering around 5 hours 23 minutes, which is not enough to last a whole day at school. If you opt to replace the pre-installed Windows S with Windows 10 Home, you might get away with a few more hours. Either way, it is below the category average of 7 hours 18 minutes; of which the Lenovo IdeaPad 120S (8:40) and HP Stream (7:09) easily achieve.

The VivoBook E203MA is no powerhouse. It also doesn’t offer outstanding endurance, or a great display or groundbreaking battery life. This VivoBook is relying on three features: It’s inexpensive, it’s light, and it offers solid connectivity. As a bonus, it adds Windows 10, making it a versatile netbook than most Chromebook around that only rely on Chrome OS.

Are there better alternatives?

The above facts provide a reasonable argument for buying the Asus E203MA. Few options exists in the world of budget ultraportables, and most of those competitors are going to be Chromebook with few advantages over the VivoBook.

Just about the only good alternative around is the ASUS L402WA-EH21, which is basically an AMD E2-6110 version of the same VivoBook model, with the same 32 Flash storage and 4GB of RAM. However, if Windows is not a must have, the Lenovo Chromebook C330 is a better buy, with double the storage, a sleek design and its battery lasts all-day on a single charge.

Yes. It’s difficult to recommend anything apart from this VivoBook because much better options that are available require a little extra dollars. In fact, this product is well-rounded for everyday use in college and, in some cases, is just as thin and light like more expensive competitors. 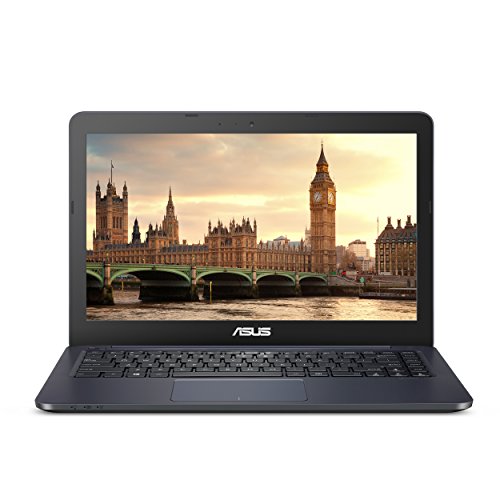