The Asus ROG Swift PG349Q is a great mid-range gaming monitor that is just as good for professional tasks including photo/video editing, and offers tons of features including Nvidia G-Sync technology, all for a reasonable price.

If you’re spending upward of $800 on a gaming monitor, that deal better be giving you the best of the best. That’s exactly what the Asus ROG Swift PG349Q offers. This 34-inch monitor offers tons of useful features for its premium price, including a gorgeous design and Nvidia G-Sync support for butter-smooth gaming performance. Factor in its solid speakers, intuitive interface and exciting ergonomics, and you’ve got an impressive high-end selection for folks who want clarity and G-Sync on a big screen.

On the outside, the Swift PG349Q looks similar to the last year’s ROG PG349Q model, sporting relatively thin bezels and a tripod-like stand that includes built-in ROG light effects (signature red LED in the middle of the stand protruding from below). The stand has good ergonomics, it can tilt 20 degrees forward and about 5 degrees backward, and swivel 50 degrees in either direction, with height adjustment up to 100 mm.

It also gets a large illuminated ROG logo for additional ambient light on the back panel. The panel uses a 1900R curvature, which compared to 1800R is a bit less of a curve/angle but it should still provide an immersive experience. Port options here include two USB 3.0 ports fed through a USB 3.0 downstream port. There is also a lone 3.5mm earphone mini-jack for audio input. For video inputs, there are HDMI 1.4 and DisplayPort 1.2, which is quite standard for most modern monitors. You also have two integrated stereo speakers on this monitor rated at 2W each.

With a maximum resolution of 3440×1440 (WQHD), this 34-inch gaming monitor has a decent 120Hz refresh rate. It uses a standard widescreen aspect ratio of 21:9 and supports Nvidia G-Sync with a peak 300 nits brightness. The panel is AH-IPS display with a wide color gamut (72 percent), which is much better compared to most sRGB monitors.

That’s not all, as it has RGB lighting integrated into the logo on the back and is Aura Sync enabled, so if you have RGB Asus hardware components, you can easily make them flash the same rainbow colors at the same time. The only potential downside here is the 4ms response time, but I’d gladly sacrifice a bit of response time to avoid using a TN panel.

The extra features aside, this monitor can be used for more than just gaming, as it has all the correct color and resolution features for professional photo and video editing. But why spend over $800 on a WQHD gaming monitor unless you have a GPU that can squeeze the graphics of any game to its absolute maximum – and even then, you might be getting 60 fps if you have the settings tuned to ultra, with ray tracing turned off.

The RTX 2080 Super (among the best graphics card you can buy right now) like the one packed in the HP Omen Obelisk will net you an average of 131 fps in ultra-settings (1920 x 1080) and it drops to an average of 131 fps in QHD settings (2560 x 1440) resolutions. Others like Hitman 2 and Shadow of the Tomb Raider (both from 2018) average 79 fps and 76 fps; 114 fps and 92 fps respectively in the same settings. Anything less than that graphics card will also yield good frame rates, and well, let’s say you won’t be able to get the most out of this monitor in 4K settings in very demanding games.

This is an extreme monitor for an extreme build, but it doesn’t hit the 4K levels of its high-end siblings. If you have some cash to drop and need 4K playability and the best of the best, the 27-inch Asus ROG Swift PG27UQ tops out with a 4K (3840 X 2160) resolution, peak 1000 nits and 97 percent DCI P3 color gamut alongside G-Sync and Aura Sync with Eye Care.

The AH-IPS display makes this monitor a standout from the rest of the crowd. Its GamePlus feature combined with Nvidia G-Sync gives the graphics a noticeable dynamism in any resolution. Colors are well balanced, bright scenes are not over blown, and the PG349Q excels especially well with gritty games like Metro Exodus and Outlast 2 – and the lighting looks just as good compared to ray tracing in some instances. However, depending on the in-game, some finer details may be too dark to make out, but bright colored games is where this monitor really shines.

All said, you’ll want a great GPU to take advantage of everything – preferably should be ideally be a GeForce graphics card or else G-Sync won’t work. With the right hardware, every game can run smoothly with the refresh rate synced to your native framerates, whether that’s 40 fps or 120 fps. If you need maximum frame rates for competitive endeavours, you’re better off with a 1080p resolution and display. Again, this is a monitor for more than just games.

The Asus Swift PG349Q is a perfect choice for the ‘go big or go home’ type, and this monitor is a current king in the high echelons. It will also function just fine as a productivity monitor, along with gaming or photo/video editing. It gives you the benefits of a high resolution and color depth at desktop, and the Asus ROG Swift PG349Q will meet your gaming needs for years to come. 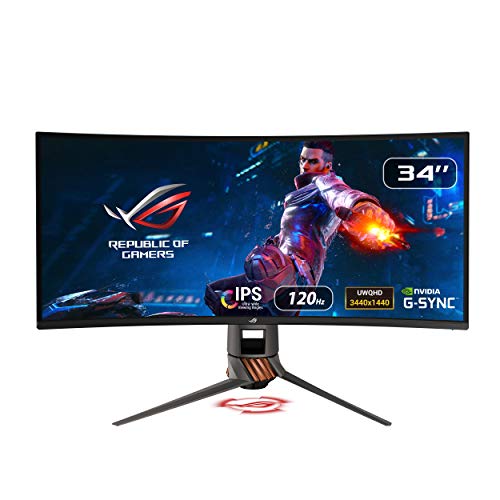