The Apple iMac MNEA2LL/A gives you the full-brilliance of a 5K Retina In-Plane Switching (IPS) display powered by a beefy Intel Core i5 processor and AMD R9 graphics. It’s is a system to grab without a second thought if you are into tasks that require insane levels of visual detail, like high-end graphics, professional photography, scientific analysis, and video editing.

And now Apple decided to make it ore affordable to own one. For that, it earns our Editors’ Choice for high-end all-in-one desktops. The Apple MNEA2LL/A’s design stands out than anything else on the system. On the outside, it’s difficult to distinguish the 2015 iMac from the previous iterations of recent years, Apple have left the design untouched since 2012. Here you the aluminum and glass chassis that is considered to be a modern classic, and defines the signature look of all-in-one desktops.

It shares the same screen with last year’s model, a 27-inch Retina 5K Display enclosed under the edge-to-edge glass. Placed on your work surface, the iMac floats and maintains an iconic look thanks to a simple single hinge connected to aluminum support arm.

Recently, we’ve seen other AIOs attempt to emulate the iMac’s simple stand, like the MSI Gaming 24GE 2QE-014US, but the Apple design prevails for its minimalism. If there is any rough spot on the stand, then it must be the lack of height adjustment for the screen. If you consider it a deal breaker, Apple has an alternative model with a similar configuration that drops the stand in favor of an integrated VESA mount adapter.

The latest iMac comes with a P3 display boasting of 5,210-by-2,880 native resolution, this means that your text and graphics with a 1:1 pixel ration (makes them tiny) are zoomed by Apple UI elements so that they appear at 2,560-by-1,440 resolution, so that you have the text and window elements smoothed out appropriately. If you need more, there are four additional scaled resolutions available in the iMac’s Display are of System Preferences.

Graphics in programs updated for the Retina Display will render at native resolution, so you can edit 1080p or 4K video natively on the screen with room for toolbars. Color output on the 5K display is just awesome. Been staring at the system wallpaper for a while, and I do enjoy the eye candy, so looking at your raw, native-resolution photos and videos will be as well.

In most high-end AIOs, we’ve come to associate them with touch-screen especially since the release of Windows 10, but since OS X doesn’t need a touch display as such, the iMac’s screen isn’t touch enabled and that is not a draw back at all. For those looking for a touch interface, the Windows-based HP Sprout or its other sibling, HP Z1 G2 workstation, are recommendable choices.

Connectivity is quite excellent, backed by plentiful I/O ports. The system’s slim tapering design of up to 5mm on the chassis sides leaves no room for connectors. Instead, you’ll find an Ethernet jack, a headset port, an SDXC card slot, two Thunderbolt 2 ports, and four USB 3.0 ports in the back.

At least they are exposed, rather than hidden in a recessed compartment, like on the MSI Gaming 24GE. 802.11ac and Bluetooth 4.0 handle wireless connections. Note that Retina Display iMacs don’t support Target Display mode, so you can’t use the iMac’s screen as a monitor with a MacBook Pro or an Apple Mac mini.

For all your intricate graphical endeavors, the 8GB of system memory and 1TB Fusion Drive are more than adequate. The base model we reviewed has a Fusion Drive as an option, but it comes standard with the top-of-the-line iMac. Fusion Drive is a self-regulating combination of Flash Storage memory and a 1TB spinning hard drive.

If you need more memory, a hatch opens on the back of the desktop, exposing two free DIMM slots, letting you easily increase the RAM to a maximum of 32GB. You can’t as simply upgrade the system’s hard drive, however. It is doable with a lot of time and determination, but you’ll need specialized tools to get into the chassis. It’s much easier to upgrade the storage from a selection of Flash Storage and Fusion Drive options when you order the system.

Like its other stable mates, the iMac comes with OS X Yosemite, which can be upgraded to the latest OS X El Capitan, and includes a collection of Apple apps like GarageBand, iMovie, Keynote, Numbers, Pages, Photos and Time Machine. This is a complete contrast with Windows systems like the Lenovo Horizon 2 that require a paid subscription to use Office 365. The hard drive is slower than the Fusion Drive in the more expensive iMac model, but once you’ve booted the desktop and loaded all your apps, you’re unlikely to notice a speed difference.

Under the hood, the 27-inch iMac MNEA2LL/A with 5K Retina Display is powered by a 3.2GHz quad-core Intel Core i5 (Turbo Boost up to 4.1GHz) and AMD Radeon Pro 575 graphics processor with 4GB of GDDR5 memory. The graphics processor is an upgrade from last years’ model with AMD Radeon R9 M290X graphics, but the processor is a slight downgrade from last’s year iteration, but both desktops will deliver almost similar performance. We took our review model on a Multimedia marathon, and it gave us a very good 1 minute 15 seconds on Handbrake; on Adobe Photoshop it gave 3 minutes 19 seconds, ad 510 points on CineBench R15.

Both configurations of the iMac with Retina Display had essentially the same performance as faster-clocked Core i7-powered Windows systems like the HP Sprout, the MSI 24GE 2QE-014US, and the MSI AG270 Gaming All-in-One Desktop. With these benchmark results, the iMac holds its ground as being certainly fast enough to sweep through your project without unnecessary delays.

The RadeonPro 575 graphics card can be categorized somewhere in the moderate-enthusiast level, since the iMac’s output was notable smooth playable frame rates on Heaven and Valley tests at medium-quality levels, although at Ultra quality in 1080p, the system began to give in but steady somewhat playable 2024 to 29 fps. This is almost the same fps we saw with the AMD R9 M290X graphics in last year’s top-of-the-line iMac, but it won’t make a big difference as you can play most modern titles at higher resolutions.

It’s at least able to play games like Civilization V and Diablo III, at medium- and high-quality settings at 1080p or better resolution. The iMac’s 3D scores actually weren’t too far off from those of the MSI Gaming 24GE, so it will give you a respectable gaming experience during work breaks. We don’t recommend pushing the screen resolution to the full 5K, however.

Whenever a new Apple system is released into the market, it is hard not to get caught up in the rhetoric, but the Apple iMac MNEA2LL/A silences critics by offering some finer things that nobody else has: a class-leading desktop with unparalleled 5K screen. Although it comes behind the shadows of its bigger brother from last the Apple iMac 27-Inch With Retina 5K  that continues to dominate the high-end AIO desktop category and worth checking outs, the new iMac is unmatched in most spheres.

While we are seeing more of 4K and 5K displays coming along to compete with it, the iMac is there first, and at a price that most will say is affordable considering the power it breathes out. If you’re excited by the speed bump you get from a Fusion Drive, slightly faster 3D graphics of this configuration, then this is the system for you.

It is a a great alternative for professionals who’ll shy away from buying a full-fledged work-station for video –and photo- editing. As such, we have no reservation to giving a nod to the latest Apple iMac 27-inch with Retina 5K Display as our Editors’ Choice high-end all-in-one desktop. 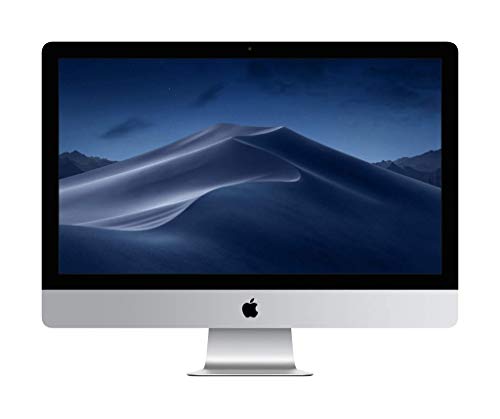