The Alienware X51 AX51R3-1510BLK is the latest entrant into the Alienware family of gaming desktops, but it’s more of an upgrade to last year’s innovative Alienware X51-R2. What you have in the newer Alienware X51 (R3) is the same space-saving small-form-factor (SFF) chassis; the same cool lighting effects but with enhanced processing power. Upgrades from last year’s iteration come by way of newer Sky Lake CPU that replaces last year’s Haswell processor, and it comes with an updated NVIDIA GeForce graphics card.

Any gaming enthusiasts will agree that PC gaming is way “better” than console gaming, considering that serious gaming rigs can easily support more than one monitor, and can be tweaked by the gaming public for enhanced game play elements. For that, we can’t agree more that the latest Alienware X51 AX51R3-1510BLK is a good bet in the entry-level gaming desktop PCs. For gamers who don’t have the luxury of space to stow a full-fledged gaming rig, the X51 suffices as the ultimate space saver. Measuring 13.5 by 3.74 by 12.52 inches (HWD), this rig will fir in the most limited of spaces in any room. It features the same matte-black case with a glossy-black front panel from last year’s X51, with each side panel sporting a triangular multicolor assembly.

The front panel is signed with a backlit Alienware logo, joined by a slot-loading DVD multi-drive. The Alienware X51 (R3)’s interior arsenal is accessible via a screw and a slight backward push of the side panel, but you need to be careful not to sever the lighting cable.

Although there isn’t much room for expansions, the compact chassis allows you to access your processors, graphics card, memory, wireless controller and hard drives; all of which can be upgradable through replacement of existing units as needed. This means that although you don’t have any open slots for additional expansion cards, nor vacant drive bays, you still have the option of replacing the single-slot graphics card.

On the dedicated Nvidia GeForce GTX 745 graphics card is the same from last year’s model and it provides HDMI, DVI, and VGA video outputs, while at the same time offering embedded Wi-Fi b/g/n networking powered by external power brick for optimal performance.

The 1TB, 7,200rpm hard drive comes with Windows 10 pre-installed and we don’t have much bloatware installed here, safe for AlienFX utility seen in previous models that serves to assign colors and event themes for the side panel and alien head lights.

The Alienware X51 AX51R3-1510BLK’s Quad Core i5-6400 2.0GHz processor and 8GB DDR4 RAM (upgradable to 16GB maximum) provide enough horsepower to cruise over most demanding productivity tasks. Its score of 3, 516 on the PCMark 8 Work Conventional benchmark test stayed clear the AMD-A10-powered Lenovo Erazer X315 (2,500) and slightly ahead of the Alienware Alpha ASM100-4980.

The Dell XPS x8900-2506BLK eschews all the competitors to lead the pack with a score of 3,527, thanks to a more potent Skylake Intel Core i7 CPU. On multimedia tests, the X51 (R3) holds its own against the competition on both Handrbake and Photoshop tests, meaning that it is aggressive enough for some serious multimedia editing tasks. Even with the limited space, make sure to give the X51 enough clearance around the chassis, especially the cooling perforations on the top. Although the X51 is not a din, form previous experience we know they tend to make themselves heard once in a while.

The NVIDIA GeForce GTX 745 with 4GB memory gives the X51 (R3) enough muscle to blaze through most game titles. Here you’re looking at between 50-60fps on most modern games at 1080p settings, and if possible you can push it up a little. However, in as much as you’re yearning for the good fps, bear in mind that cooling in this unit isn’t one of the best, especially for a gaming desktop.

The X51 uses a low profile compact blower design which sounds promising o paper, but in our tests, the unlocked K-series processors that can overclock up to 4.4GHz would not be kept silent though not uncomfortable at all.

The system comes pre-installed with Windows 10 Home (64-bit), but I know most gamers will yank it out for Win 8.1, but that isn’t a deal breaker for now. The system delivers better fps on most games even in ultra settings, which is almost similar to what we saw in the Lenovo X315 that remained stable even as we toned-up the eye candy during gameplay.

The Alienware X51 AX51R3-1510BLK shows that you don’t need a full-fledged tower to enjoy serious PC gaming. Sometimes a little neat system that won’t dry your pockets is just enough. A combination of the latest Skylake Quad-Core i5 CPU and NVIDIA GeForce GTX 745 GPU both provide solid entry-level gaming prowess. Plus, you get the signature Alienware dime, including game-ready lighting and a glowing alien head, all in a compact space saving SFF chassis.

For storage, you have a 1TB hard drive, which is quite enough for stashing away your games, movies and other project, and there is a pretty decent collection of I/O ports for your external peripherals, but you have no room for internal expansion.

If you’re not interested in future upgrades and are satisfied with the 8GB and Core i5 (which is actually more than enough for duding gamers), then the NVIDIA GeForce GTX 745 is what we can call as step in the right direction.

However, for those looking for enough real estate for future upgrades and expansion, our Editors’ Choice budget gaming desktop, the Dell XPS x8900-2506BLK is a safe bet, thanks to a larger, expansion-friendly case, more storage space, and better overall gaming performance. 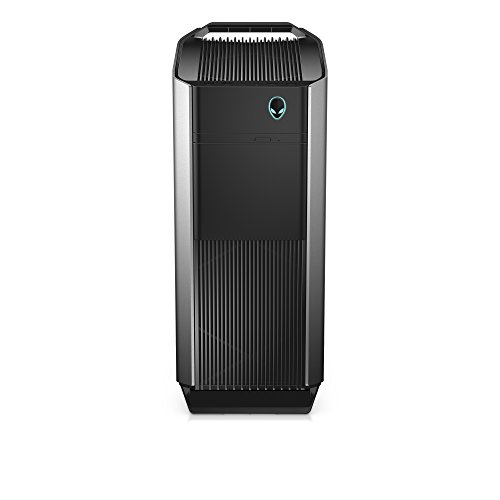