The Acer Spin 3 SP314-53N-77AJ is a 14-inch laptop that can fold into a tablet, can last a full day on a single charge and can easily be carried around on daily commute. It enters a crowded market of 2-in-1s, some at very low prices, but it promises strong performance and perfect audio for media consumption.

While the Spin 3 looks attractive, it skimps on some features when compared with other convertible laptops, like an uninspired plastic build and lack of a USB-C port. In terms of performance, however, it lands towards the front of the pack. If you can look past these tradeoffs, the Acer Spin 3 is a good choice for anyone looking for an affordable 2-in-1 laptop.

The case is cut from black plastic with an attractive brushed finish, which doesn’t match the aluminum construction on most 2-in-1 convertibles. While the plastic material leaves a lot to be desired, it makes for a low price for anyone interested on performance over looks. The laptop has two sturdy, yet flexible hinges that let you switch between Laptop, Tablet, Stand and Tent modes.

Connectivity comes in way of two USB 3.0 ports, an HDMI, a power connector, a USB 2.0 port, an SD card reader, and a headphone/mic combo jack. It doesn’t include a USB-C port, which is a glaring omission at this price point. The full HD (1,920-by-1,080) IPS touch screen is bright and beautiful, it looks even better in Tend mode. The panel is surrounded by thick black bezels, which is rather odd, considering most 2-in-1 laptops are adopting thin bezels. The LG Gram 14 (2019) is one such example, with very thin bezels surrounding the screen, but it adds solid performance, a premium design and solid connectivity, including Thunderbolt 3.

Other laptops we’ve seen in this category cut corners with a 1,366-by-768, so we’re happy to see full HD here. There’s an integrated 720p HD webcam above the screen that offers clear images for video calls. On the keyboard deck, raised off the deck, there’s a top-firing speaker grille. While the screen bezels are not an eyesore, they are a reminder that this isn’t a premium laptop.

For creative artist, the Spin 3 includes a rechargeable Active Stylus Pen that works fine with the 14-inch IPS screen. You can use it for drawings, illustrations and everything else that requires a creative hand.

The backlit keyboard has a slippery feel, with 1.2 mm keys that are a bit shallow for comfortable typing (1.5 mm to 2 mm is ideal), and they don’t feel very tactile either. Nonetheless, the backlit keys provide some good key travel, although its clear they were never built to withstand damage from damage in Tablet mode, when the keyboard faces out. The same doesn’t extend to the plastic around the keyboard.

As if on cue, the Acer Spin 3 SP314-53N-77AJ gets a better touchpad, than most convertibles we’ve reviewed. The 4 x 1.5-inch surface reacts promptly to a series of Windows 10 gestures, including pinch-to-zoom, three-finger swipes to change apps and three-finger taps when launching Cortana. The Acer Spin 3 SP314-53N-77AJ wields an 8th generation Intel Core i7-8565U CPU that runs at 1.8GHz (Turbo 4.6GHz), 16GB of memory, 512GB solid-state drive and Intel HD Graphics 620 that help the system achieve excellent performance. The laptop remains steady even when you load 30 Google Chrome tabs, with minor hiccups only when you simultaneously stream three 1080p YouTube videos and a Twitch stream in the background.

The Core i7 processor used here is among the best you can get on a mobile machine, and the fact that Acer doubles the RAM over last year’s model, totaling 16GB makes its an even appealing choice for daily productivity. Additionally, the 512GB SSD presents real value, both as a speedy storage option and provides enough room for storing your documents without the need for an external drive.

With these features, the Spin 3 may not be a speed demon, but its fine for everyday tasks like surfing the web, watching movies on Netflix, college tasks and even spreadsheets at the office.

Most laptops in this realm employ integrated graphics, like the Intel HD Graphics 620 used here, which doesn’t manage the 30 FPS mark we consider passable quality for gaming. The ASUS ZenBook Flip 14 UX461UA-DS51T is among the few exceptions with a dedicated Nvidia MX150 graphics card that lets you play casual games.

Unlike last year’s Core i5 version, the i5-equipped Acer Spin 3 will last almost an entire workday on a single charge. The laptop promises an impressive 10 hours 34 minutes, although Acer bills it at 12 hours. Whichever the case, its battery performance is way above the category average (7:28), something most notebooks fail to achieve.

The Acer Spin 3 SP314-53N-77AJ is perfectly positioned in the midrange convertible 2-in-1 niche, providing solid performance and good battery life. Additionally, it’s well-built, is attractively priced, and tosses a versatile convertible design. Only a rather dim and slightly low-contrast display hold it back from being our Top Pick in this this price range.

With the right budget, you can’t miss a better alternative. The most direct competitor to the Acer Spin 3 is Lenovo Flex 14 that features an AMD Ryzen R5-3500U processor, a 14-inch touchscreen, 8GB RAM, 256GB SSD and AMD Radeon Vega 8 Graphics. It also includes a Stylus Pen, but rings a lower price, justifiable by the fact that it gets half the Spin 3’s RAM and storage.

Maybe. The Acer Spin 3 SP314-53N-77AJ is a decent enough midrange convertible 2-in-1 option, but it is held back by the plastic construction, dated bezels and dim display. The long battery life and 8th generation processor count for a lot, but the same features are coming to other machines and don’t stand out as vital features.

For a perfect mix of features, premium design and reasonable price, the ASUS ZenBook Flip 14 UX461UA-DS51T is an excellent buy. 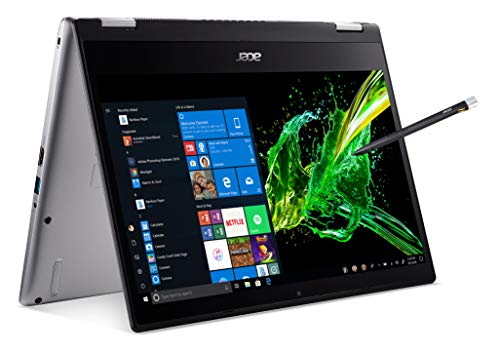