Let’s be honest, a gaming PC is never easy to come by, despite PC gaming growing faster than ever. This makes the Acer Nitro 50 N50-620-UA91 so great for folks just starting out with PC gaming. For under one grand, this entry level gaming desktop features a six-core Intel Core i5 processor, 8GB of RAM, an Nvidia GeForce GTX 1650 and a 512GB SSD alongside Intel Wi-Fi 6 AX201 connectivity.

This hardware may not deliver the ultimate greatest performance for the latest AAA-titles. For instance, the budget-friendly GTX 1650 included doesn’t offer ray tracing or DLSS capabilities. SSD storage is a bit lean at a time when game sizes are increasing as well. However, it’s more than capable for today’s biggest esports games such as Fortnite, Rocket League and League of Legends. Plus, upgrading the Nitro 50 isn’t difficult now that Windows 11 is already rolling.

The Acer Nitro N50 shares the same design as the Acer Predator Orion 3000 – a sturdy metal and plastic through the case alongside a modest 15.43-inches height and 6.89-inches width. That compact size mean that the Nitro N50 can fit into a compact home configuration and easily transported, and the solid build quality means that this rig will withstand frequent trips.

On looks, the Nitro differs from its stablemate. The Acer Nitro N50 comes with a metallic black front panel, a gunmetal grey plastic and a slashed indent that glows with red lighting. On the front panel, there’s a single USB 3.2 Gen 2 Type-A and Type-C and a pair of audio jacks, which is decent connectivity – and they are not hidden behind a flimsy door. Around the back, there are more ports: 1 USB Type-C, 2 USB 3.2 and 2 USB 2.0, as well as an included keyboard and mouse.

The Intel Core i5-11400F is a Tiger Lake CPU, but little differentiates this chip from its predecessor, the Core i5-100400F. The Core i5-11400F still has six Hyper-Threaded cores, its base and boost speeds of 2.60GHz and 4.6GHz barely differ from the older chip. The CyberPowerPC Gamer GXiVR8060A11 uses the same chip, but maxes out with an Nvidia RTX 2060 GPU, while the HP Omen 30L packs a more powerful AMD Ryzen 7 5800X CPU and a GeForce RTX 3060 Ti, but it costs more than both the Nitro and Gamer.

It’s enough pace to play any single-played title at 1080p at decent quality settings – you’ll be fine unless you’re trying to ace the market’s toughest games with every setting maxed out. The Acer Nitro N50 will handle eSports titles on smooth 144Hz panels, too.

That’s not to say the GPU is free of flaws. It lacks Ray-Tracing cores which means it only averages an underwhelming 30fps and 17fps in Wolfenstein Youngblood’s Ultra tests – since that game uses Ray-Tracing. Once you turn Nvidia’s feature off, those scores improve to 132fps and 83fps.

The Acer Nitro 50 N50-620-UA91 is a small, sturdy and affordable gaming PC for gamers on a shoes-string budget. The lower price means you get a modest specification, but still has enough ability to handle 1080p gaming, and the CPU can handle day-to-day use. It also gets some decent connectivity and storage.

Also, the lower price means some noticeable compromises. The GTX 1650 lacks Ray-Tracing and can’t compete with some more expensive rivals for speed, and other similarly priced PCs offer more CPU power if you need a system for work as well as play.

As usual with a big-brand PC like this, the Nitro N50 has an underwhelming motherboard and interior. As such, buying a boutique builder will get you better hardware in those departments, even with the same budget.

For around the same price, our Editors’ Choice for midrange gaming PCs, the CyberpowerPC Gamer GXiVR8060A11 is an excellent choice. It packs an intel Core i5-11400F, 8GB RAM, 500GB SSD storage and a GeForce RTX 2060 (6GB) GPU. It remains our top pick for budget gaming.

However, the Acer Nitro N50 is attractive and well-made and the downsides are understandable. The Acer Nitro 50 N50-620-UA91 is an affordable 1080p gaming PC, that’s a capable and affordable option for single-screen gaming and eSports. 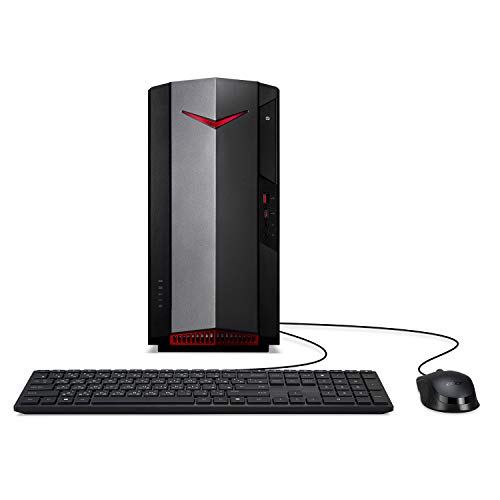