A budget Chromebook built to last, but is it for you? The Acer Chromebook 311 C722 is inexpensive, has solid battery life, a splash-proof keyboard, and a rubberized design that will survive a beating from kids and clumsy adults, but then it also won’t do everything you may want from a laptop.

The Acer Chromebook 311 C722 is exactly what many people expect of a budget Chromebook. Small, inexpensive, and capable enough to handle work and light play daily. This Chromebook has absolutely zero premium appeals. Instead, it’s all about foolproof computing at a price everybody can afford. Is that enough to qualify for a slot amongst today’s best Chromebooks?

Running Google’s browser-based Chrome OS rather than Windows, this laptop comes with military-grade toughness and a spill-proof keyboard rubberized chassis edges. Everything else is pretty basic, from a limited number of USB ports, a compact 11.6-inch 720p resolution display, and no touchscreen capability.

The Intel MediaTek MT8125 is likewise an entry-level affair, ditto the 4GB o system memory and 32GB of onboard storage. But then, the reprieve here is that the Chromebook 311 C722 is a reliable, everyday computing machine designed for young users.

In other words, if you’re looking for an affordable laptop that can take a beating from kids, Acer got you covered well. Question is, does it have what it takes to get the basics done?

Here, you simply get what you pay for in terms of a rugged design, that looks great. While at over 2cm thick and, at 1.99kg, it feels comparatively heavy, the Acer Chromebook 311 C722 feels solid, with a thicker lid than your average Chromebook, and has a heavy, rubberized bumper protecting all the edges on the base.

As mentioned, it comes with a spill-proof keyboard that signals it’s designed for the education market, but you’ll be glad about its tough construction if you’ll be carrying it around all day from class to class or job to job. There are thick rubber pads on the bottom that help keep it anchored to a desk or your lap while on the move; again, giving the impression that this is a machine designed to absorb the beating from hard use.

This Chromebook is very practical and should appeal to most targeted users. In terms of connectivity, everything is pretty basic, with just a single USB 3.1 Type-C and a matching Type A on each side of the laptop, along with a headphone jack. Wireless connectivity comes in way of 802.11ac Wi-Fi and Bluetooth 4.2.

The keyboard and trackpad are both basic offerings – nothing fancy here, but usable, responsive, and long-lasting. Acer made the touchpad out of plastic but not very glossy, it doesn’t stick and the integral buttons at the front click easily without too much force.

On the other hand, the keyboard has a light and spongy feel to it, common with cheap Chromebooks, but it’s not much of an issue. In a few days, you’ll get used to it, and the keys actuate consistently when tapped.

As ever with cheap laptops, something(s) must give. In the case of the Acer Chromebook 311 C722, the screen is sacrificed, but we expected it. While its peak brightness isn’t horrible at 238cd/m2, its contrast would be better, blacks look grey and the whole display looks fuzzy and dim. That’s expected of a 1366 x 768 resolution LCD display, and any slight tilt of the screen either backward or forwards from the optimal angle and the contrast fades away and colors begin to invert.

Elsewhere, colour reproduction is basic, with the screen struggling to cover 50% of the sRGB colour gamut, and the accuracy figures – a Delta E of 8.52 – are typical of cheap TN screens. Still, that’s adequate for browsing and simple work (or college assignments), but it’s not the kind of device you’d want to watch or play games on. However, parents buying the Chromebook 311 C722 for education purposes will find this fulfilling.

The sound, meanwhile, is quite audible, but with a painfully thin and treble-heavy tone. You’ll be safe with your headphones at hand, but a class full of these fired up loud will be hellish.

Performance isn’t far from what you envisioned of a cheap Chromebook in this class. The MediaTek MT8125 is a low-cost ARM SoC (System on a Chip) commonly used in tablets and Chromebooks. On the Chromebook 311, it’s paired with 4GB RAM and 32GB flash memory, a combination that’s meant to run basic tasks. All it means, stick to basic and light productivity apps and everything will run smoothly, but you have to be realistic about what a Chromebook like this can achieve.

Thanks to the low-spec components, the Acer Chromebook 311 comes with low expectations from a performance perspective. However, if you keep things with remit and it stands out as a pretty impressive little portable. You’ll be surprised that it can drive an external 1080p monitor at full resolution, and it even renders a high-quality YouTube stream flawlessly via the USB Type-C port that supports DisplayPort over USB-C.

Less impressive, while we’re talking of video is the integrated webcam. The image quality is bad, the frame rate awful and there’s quite a lot of lag. It’s usable, to be fair, and at this price point, something has to give. In this case, one of those things is a decent webcam, which you’re not getting.

As for broader system performance, Chrome OS feels fairly snappy and responsive, even on an external display. There’s simply no way Windows would feel this responsive running on the same hardware. If you need more gust in a Chromebook, the Lenovo Chromebook Flex 5 is a fine alternative with a Core i3 chip, has a 1080p touch display and boasts more storage, and of course, will set you back more money.

Battery life, however, is fantastic; you can hit over 10 hours of video playback before the C77 runs out of juice. That’s very impressive at this price point, and means you can expect true all-day battery life.

Somehow, it’s only the robust build that makes the Acer Chromebook 311 C722 special. If you’re looking for a rugged budget Chromebook with true all-day battery life (and then some), then this is a thoroughly viable option, for as long as you can live with the screen and lack of speed.

And with its thick bezels and low-quality TN screen, it fails to immediately impress. However, with closer interaction is when you realize this is a well-thought-out little laptop. Acer extended a lot of effort into making it rugged and durable, including the rubberized chassis, military-grade body, and splash-proof keyboard.

Overall, as a value proposition and assuming the webcam and screen don’t give you a pause, the Acer Chromebook 311 C722 is a fairly effective and impressive budget device. Meanwhile, the ASUS Chromebook Flip CX5 (CX5500) remains our Editors’ Choice thanks to a sleek design and powerful all-around performance. Check it out if you’ve got a budget that can stretch a little more. The Acer Chromebook 311 C722 is inexpensive, has solid battery life, a splash-proof keyboard, and a rubberized design that will survive a beating from kids and clumsy adults, but then it also won’t do everything you may want from a laptop. If all you want is a laptop that will take a hit and get on with basic daily jobs, then this is a good buy. 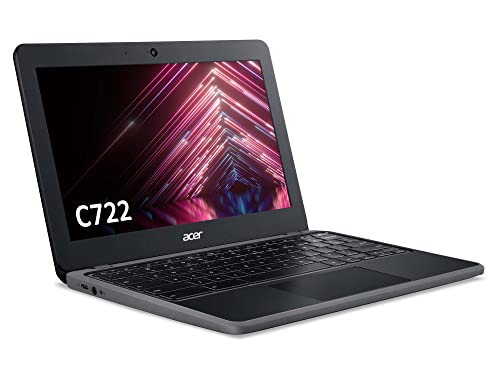