The Acer Aspire TC-885-ACCFLi3O is a capable budget desktop computer with a speedy eighth-generation Intel Core i3 processor, 8GB RAM, 16GB Intel Optane Memory and a 1TB hard drive for storage, and it comes with Wi-Fi (something you rarely find in budget tower PCs). For the casual home-office user, it has everything you’d ever need in a general-purpose PC, plus a few extras that make it worthwhile for the long haul. For all these reasons, it easily earns our Editors’ Choice for budget desktop PCs. The Acer Aspire TC-885 midtower chassis measures 13.4 by 6.4 by 13.7 inches (HWD), and is cut from black painted steel and plastic. Its predecessor had a plain black front casing, but this one gets a V-Shaped orange LED surrounding the power button on the upper front, next to the Acer logo. Also, there is a midline silver line running from the top to the bottom. The lower panel holds an Aspire logo, while the right-half holds a tray-loading DVD drive and a couple of I/O ports.

Being a mid-tower doesn’t prevent it from getting a few slots for upgrades. There are PCIe x16, PCIe X1, one M.2 for SSD and one M.2 for WLAN/Bluetooth slots, but the system is still fully-functional out-of-the box.

For starters, Intel Optane Memory Module is not a solid-state drive, or its alternative. Rather, it ‘s a form of disk caching that is meant to provide users with fast data access like SSDs combined with the high capacity of HDDs. In fact, it can be used alongside an SSD, but it’s more preferable with HDDs that are considered slower mass storage disks.

With an Optane Memory Module installed, commonly used data gets replicated into the M.2 Optane Memory storage, while less important data is picked from the hard drive. It’s a great idea, at least on paper, but it isn’t always a perfect solution. By using a “least recently used” (LRU) approach to determine what gets stored in the fast cache, you’re able to get faster data read speeds from a sower HDD storage, which then gets copied over to the cache.

On the Acer Aspire TC-885-ACCFLi3O, you have a 16GB Intel Optane Memory paired with 8GB DDR4 RAM, making it a remarkable boost to the 1TB 7200RPM storage option. Instead of a true SSD that would hike the system’s price, the Optane module count for a lot at this price point. Performance is a highlight, since the system comes with an Intel Core i3-8100 processor with Intel UHD 630 graphics card built in. Additional performance perks include 8GB of RAM and 16GB Optane memory as well a spacious 1TB hard drive for storage. Essentially, this Acer Aspire will last for at least the next five years for day-to-day tasks, like editing in office apps, video conferencing, and web browsing.

However, the integrated Intel UHD 630 graphics card may not suffice for gaming, which isn’t surprising at the Acer Aspire’s price point. Still, you can crack a few online casual games Like Minecraft and the likes, everything else will be at very low frames per second (FPS). In case you need something for daily productivity and gaming at the same time, but on a tight budget, our Editors’ Choice the CyberpowerPC Gamer Xtreme GXiVR8060A7 offers the best of both worlds.

The Aspire TC-885-ACCFLi3O is a good option for families who want a shared desktop that can be used for work in a home office, as well as a small business environment. While it doesn’t go far enough in terms of custom cases or expandability options, it still remains functional out-of-the-box. And, it can be upgraded down the road unlike most of its competitors.

You might think going for a previous generation processor will save a few dollars, but the Acer Aspire offers even more value. Unless you need a gaming desktop, for which you can consider the CyberpowerPC Gamer Xtreme GXiVR8060A7, our review unit remains the best in its class.

Yes. If you need a budget jack-of-all-trades, the Acer Aspire TC-885-ACCFLi3O is everything you need, making it a good choice for a gamily PC. 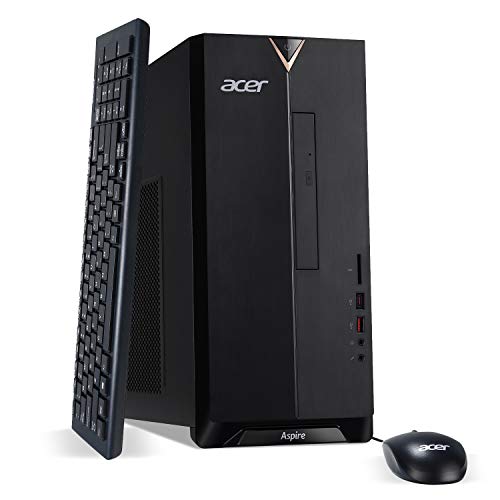